Becky Mahmud: A Nigerian story of rape and survival

“Have you ever been beaten and raped? With blood pouring from your head?” – Becky Mahmud*

Those words were my introduction to Becky before we met, which she wrote a year ago while crowdfunding her school fees. They tortured me for months. Caught between the trauma of the rape she described and the opportunity to go to school, she chose the latter. Imagining the daily abuse she endured because she didn’t have many options is a hard image to push away.

Sitting across from Becky in the Stand to End Rape Initiative office in Lekki, Lagos, the first thing I notice about her is her uneasy walk. Her expressions, coy and jittery, tell me that she has recited her story to only a few people. We casually chat about her commute from Abule-Egba to Lagos Island and how a 90-minute trip of jumping Lagos buses took forever. “I’m fine,” she says to me as if to assure me that whatever I was thinking, it was not as bad as I pictured it.

We settle into a conversation about the first time she was sexually abused. “It was in 2013. I was 16 and excited to go to my Pastor’s house. He promised to pay for my WAEC and JAMB and get me into a good university; I didn’t imagine it to be the beginning of rape,” she says in a pained voice.

Becky grew up in Shira L.G.A in Bauchi State with eight siblings and a poor father. “My father earned ₦8000 a month working as a security guard, and all of us had to use that to get by,” she remembers. She got through secondary school with the help of one of her sisters, Janet, who was gainfully employed at the time.

Things went south when Janet lost her job. “I was devastated until the idea of going to the pastor for help came up.”

The Pastor agreed to pay for Becky’s final exams at the university and take care of her. Besides being tagged as a God-fearing man, he was also a well-respected member of the community, so Becky was at ease and oblivious to what was going to happen to her. “I did not think anything of his offer,” she says twice, emphasising how unprepared she was for what was to come.

A year after moving in with the Pastor, Becky passed her WAEC exams.

Soon after, a conversation about what university to attend marked the beginning of a harrowing period for her. “He invited me to stay on his bed. I was uncomfortable with the idea, so I declined,” she recalls. “He grabbed me, and when I started to struggle, he locked the door behind me. There was nobody at home to help me. He raped me.” The words come out of her mouth in a hurry, and she distracts herself by fixing her gaze on a pile of folders on the other side of the office. She explains how she left the Pastor’s house the next day after the maid found the sheets covered in blood hidden away. “She immediately understood what happened and told me not to tell anyone. The maid gave me some money to return to my father,” she says.

Becky was silent about what happened to her when she returned home. Part of what encouraged her silence is Nigeria’s ingrained rape culture. When I asked why she did not tell anybody about it, she says she weighed her options and realised the odds were stacked against her. It was her word against that of a popular and well-respected man of God; even if she told people, they would not believe her. “Even though I cried for days, I did not tell anybody about it. Does that make sense?”

Rape culture describes a society that normalises or excuses sexual abuse. It usually manifests in victim-blaming, refusing to take rape accusations seriously, encouraging a culture of silence, and few rape convictions. It is a culture that ignores rape victims’ trauma in complicity with the rapist.

In 2011, a video of the gang rape of an Abia State University student by five men was posted on social media. Despite video evidence, the Abia State Governor denied the incident and excused the perpetrators, suggesting the victim consented to the rape because “we did not see her resist in the video”. Social media turned against the victim, and the case evaporated. No charges, no arrests.

This culture of trivialising sexual abuse is what convinces survivors like Becky to stay mute about their experiences.

One of the most inspiring things about Becky is her resolute desire to complete her tertiary education. Back in her father’s house, she did not stop thinking about Nursing. “I have always wanted to be a nurse. Thoughts of actualising that dream never left me, it is what I am most interested in,” she asserts.

So, when a family friend parked outside her father’s house one afternoon in 2015 and offered to send her to the university, she agreed without hesitating. “My uncle offered to send me to the university, I saw it as an opportunity to study Nursing. My father accepted his offer too,” she explains. “I don’t know why but at that moment I did not think that I’d be raped again,” she tells me, fighting back tears.

In pursuit of her dream, Becky went to Ogun State to live with her family friend, a man she refers to as her uncle. For a while, everything was fine. Becky loved her uncle’s family as soon as she met them. “His wife is a really nice woman, I did all the housework, but I did not mind because what I was getting in return (going to school) was bigger than whatever work I was doing,” she narrates slowly, urging me not to miss any detail.

She tells me about school, a university in Togo that offers distance learning options for people in Nigeria. “I have classes in Nigeria, we get study materials online and go to class and take exams in a centre here,” she explains.

We talk about when the abuse first started and one phrase rolls off her tongue: Déjà vu.

“Again, my uncle invited me to his room to talk about school, just like the Pastor did, and asked me to sit on the bed next to him,” she recalls. “It was really fast. He pinned me down and raped me,” she tells me with her eyes swelling. As she cries, she explains how she wondered if there was something wrong with her, or if something about her face spelt rape. “I thought it was my fault. I didn’t understand why I was constantly being violated by the men meant to protect me. Does that make sense?”

Self-blame is a cognitive process where a victim attributes the cause of a traumatic experience to herself. It gives meaning to an event by allocating a causal responsibility. In Becky’s case, she attempted to understand her situation by finding fault in herself whether or not they contributed to the sexual abuse.

She continues. “I lost count of the number of times he raped me. He used to tell me that if I mentioned it to anyone he would stop paying my school fees,” she says. If you tell anyone about this, I will stop paying your school fees. She repeats his familiar threat to me, so easily that I can tell she has repeated it to herself many times. Her uncle knew what she was passionate about the most and used it against her. He knew he could hold her captive with his economic power.

Her breaking point came two years after the abuse began. She reached out to a friend in Abule-Egba and narrated what she was going through. “My friend could not believe what had been happening to me. She convinced me to speak to someone about it. I did not want to at first, but she pushed, and I reluctantly agreed,” she says to me. I ask why she did not feel the need to speak about it and she says she did not trust anyone to help her again; she had been ‘used’ twice already and was not prepared to relive the ordeal.

She had begun to associate help with abuse.

“It was the woman my friend introduced me to that connected me with Stand to End Rape (S.T.E.R) Initiative. Their executive director took up my case last year. I’m no longer with my uncle because she came into the picture,” she says with a faint smile, and I can sense the freedom she feels from being separated from her uncle. Her abuser.

S.T.E.R Initiative, a not-for-profit organisation catering to survivors of sexual abuse, helped crowdfund Becky’s school fees. “I remember telling my uncle that I was leaving his home, he was shocked. He asked what would happen to school and I told him someone was willing to take care of it,” she explains. Though her uncle did not understand what had happened to her, he did not press much because he no longer had leverage and feared she’d tell his wife. “I told him that If I stay his wife would find out, that made him back off,” she tells me.

Becky does not wish to prosecute her uncle for his actions. I ask her why she turned down S.T.E.R’s offer to pursue the case legally, but she shrugs as she answers, and her bored expression shows she is tired of answering this particular question. She talks about not wanting to be dragged back into the cycle of abuse and re-living her experience in court. “I don't want to drag his wife or anyone else into this. I'm going to leave everything for God and focus on my books,” she says. It comes out of her with so much conviction that I don’t dare question her.

When we talk about financial independence, she tells me she enrolled in a bead-making course and is done with her training. She seems enthusiastic about that skill and adds that she has become skilled at braiding hair as well. “I didn't learn it. It's something I found out I could do over time,” she explains.

And how about a job? “I am willing to try my hands on anything.” She confides in me.

At the moment, Becky lives with her friend somewhere in Abule-Egba. She tells me about her plans with Stand to End Rape to transfer to a university in Lagos and continue there. She’s excited about what the future holds; I can tell because she’s making faces and her voice is getting higher. “I don’t have a lot of money now, but I don’t mind because I am going to get that degree,” she says to me with the widest smile of the day. 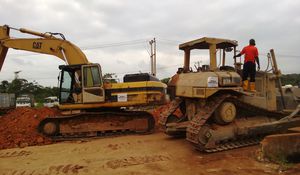 The problem with pensions in Nigeria 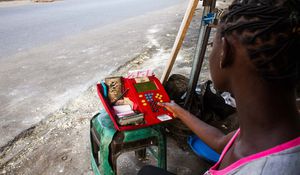 Baba Ijebu - Lagos' Red Boxes and the Women Who Man Them