Before A New Nigeria Airways

At his inaugural cabinet speech in 2016, Ugandan President Yoweri Museveni claimed it was a "big shame" that the country did not have a national carrier. But it did – or at least it once did. In 2001, Uganda Airlines was liquidated over debts reaching $6 million.

Mr Museveni is not alone in calling for a national carrier even in the face of economic experience to the contrary. President Muhammadu Buhari looks intent on fulfilling a campaign promise of reestablishing a Nigerian national carrier.

Many state-owned airlines have struggled financially in recent times in a more competitive market for air travel. The defunct Nigeria Airways offers an example close to home. For those who remember, the airline once boasted efficient services with cheap fares, triggering a mini-surge in the number of Nigerians travelling by air.

So what happened to this one-time symbol of national pride? Treading a path similar to the country itself, the airline deteriorated gradually, with a growing laxness towards safety resulting in a spate of plane crashes in the 1970s. But mismanagement was another leading cause of the rut as top positions were used as bargaining chips and political tools by successive administrations until the professionals that built the institution were gradually phased out. The airline was used to compensate political allies with free flights, and the managers themselves were accused of graft and money laundering.

Amid all this, it was no surprise that the airline's operating fleet shrank from 32 to 1, leaving the corporation buried under debt to the tune of $60 million at the time of its liquidation.

Some now consider Nigeria Airways a significant "What if?" story in our economic history, especially with the domestic aviation industry in such dire straits. Already hamstrung by inconsistent policies, multiple taxation, inadequate infrastructure, and poor regulatory oversight, the recent foreign exchange crisis left the industry on the brink, with some larger players paying the price.

But a closer look will tell us that we have made significant forward strides in the decades since Nigeria Airways. For one, higher safety standards have led to less frequent crashes, and the vibrancy of bodies such as Nigerian Civil Aviation Authority (NCAA) has assisted growth in the sector.

So would Nigeria Airways V.2 address the remaining challenges? Some argue so, citing an expected boost in tourism, deeper competition, cheaper fares, and greater representation in the global aviation space. As sensible as these arguments may be, a national carrier does not seem to be the best route to bringing about these changes. And with likely government interference and negative omens from neighbouring countries, we have reason to be wary.

Fortunately, more effective alternatives abound. In line with this endorsement of economic migration, the International Air Transport Association reports that opening up the Nigerian airspace to allow more frequent and direct flights to and from various African cities would boost the Nigerian economy by $128 million and could create over 17,000 jobs. Although Nigeria has signed over 50 Bilateral Air Service Agreements (BASAs), most have been restricted to a few cities and a set frequency of flights per week while many other key cities lack direct routes (Abuja-Dakar, Lagos-Kumasi, Port Harcourt-Cairo, etc.).

BASA's are meant to protect domestic carriers from competition from stronger international competition. In 2011, the NCAA reported that international carriers controlled 85% of air traffic. These BASAs have failed to achieve their objectives, and it is time for us to review them with the aim of increasing intra-African transit.

But Nigeria can also look internally for ways to improve. Airlines have long been subject to multiple taxation. According to the Airline Operators of Nigeria, domestic airlines pay 35-40% of ticket fees in taxes and charges. These vary from Sales charges, VAT, to Landing Charges, and Parking Charges. Such a burdensome tax regime has suffocated the industry, making it nearly impossible for growth in low-cost carriers like we have seen in other parts of the world.

Despite these high charges, airlines still encounter the "bring your own infrastructure" culture in Nigeria. Thus, an upgrade of air travel infrastructure is needed, starting from 24-hours light installation on runways and domestic terminals, navigational landing aids, and adequate maintenance facilities to service planes. Like other industries, the infrastructure deficit hinders full capacity utilisation, a necessity for pricing in modern-day air travel.

I have merely touched on these ideas, but they go a long way to show more urgent areas of change, as opposed to the basic logic of reinstating a national carrier.

Get Ready For Takeoff

As a new national carrier looks like a near reality, we can at least comfort ourselves with success stories elsewhere. Ethiopian Airlines is a flagship state-owned airline which has thrived despite being in existence for over seven decades. The airline recently struck a deal to increase its fleet with Boeing and Airbus, the world's two largest aircraft manufacturers. Why has the airline thrived? Though it is entirely state-owned, it is managed by aviation professionals and is mostly free from government interference. This offers one template for struggling African airlines, though it is one that the continent has often failed to heed.

In today's global world, aviation is critical. But Nigeria does not need a national carrier to gain optimally from the industry. If we still decide to take that route, we must ensure a mix of high technical expertise and low government interference, to avoid repeating previous mistakes. With President Buhari at the helm, Nigerian Airways V.2 may just get off the ground; like his tenure so far, expect some turbulence. 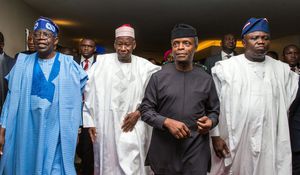 Corruption Will Not Kill Nigeria 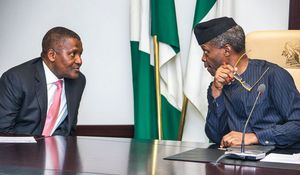