Economic Growth for All

If you want to determine how healthy any economy is, there are a wide range of indicators at your disposal.

In many circles, economic growth has been adopted as the totem for economic wellbeing. It should then come as no surprise that politicians and other policymakers tend to use economic growth as a marker of how good a job they are doing.

For example, during his campaign, President Buhari's advisors committed to delivering double-digit economic growth by 2024. An ambitious plan, and at a surface level, it ought to be welcome given the tough economic conditions Nigerians have been subject to in recent years.

However, this might be a misguided target for improving the wellbeing of Nigerians, mainly because growth does not necessarily mean growth for all.

What does it mean to grow?

To understand why let's consider how economic growth is calculated.

But first, why focus on economic growth?

To measure the size of an economy, or to show that Nigeria's economy is larger than South Africa's, you would most likely compare their Gross Domestic Products (GDP).

Calculated in different ways, GDP is commonly measured as the total expenditure of all households, businesses, the government, and flows of exports and imports of a country. Essentially, the money you spend on goods and services such as weddings or data for your phone—that's all included in GDP.

So, if Nigeria's GDP increased, it could signal good things are happening. For example, if Dangote opened a new oil refinery, this would create multiple jobs, which means more people earning an income, thereby increasing the country's wealth.

So a high growth rate is great, but is it enough?

The short answer is no.

Simply put, growth does not explicitly carry everyone along. Say Dangote's refinery boosts annual GDP by $2bn via income for the company and a few hundred workers. That is unlikely to do much for the millions in impoverished areas of the country. The same $2bn spent on a welfare package for thousands would be better for the wellbeing of more Nigerians.

Economies do not necessarily grow in a balanced manner. Those who are not involved in or related to the growth-generating sector of the economy are bound to get left behind. This happened in Chile when exports of copper, wine, fruit, and salmon led to rapid growth rates. Unsurprisingly, those who were directly involved in the economic activity of these sectors benefitted the most. As a result, until today, the wealthiest 20% of Chileans still earn 14 times more than the poorest 20%.

Bringing it closer to home, we can look at nearby Ghana, who has recently been cited by the IMF to be the fastest-growing economy in the world this year. While this is good news, this growth might come at a cost to some Ghanaians. To elaborate, a 2014 study found that the agriculture sector, which Ghana’s economy has traditionally depended on, is being replaced by a rapidly expanding services sector. This shift has its positives but will likely widen the income and infrastructure gaps between rural and urban dwellers as industries and jobs become more concentrated in higher-skilled sectors, often located in the urban south. With about 70% of the population living in rural areas and depending on agriculture, rapid urbanisation could compound the issues of weak rural resources.

So which way Nigeria?

A clear route is for policymakers to take development seriously, and ensure growth does not only benefit a few.

We already have a few success stories. For example, the recent decision to join the African Continental Free Trade Area (AfCFTA) is exciting because it means Nigerian businesses will now have more customers. The impact on GDP, as described earlier, is obvious. However, to ensure overall improvement in the country's wellbeing, policymakers will do well to ensure that not just some exporting businesses benefit from this. Some sectors may indeed lose out as a result of the agreement, and the government should provide a smooth transition for negatively impacted workers.

Elsewhere in the economy, there are other improvements. Last year, telecom companies were granted permission to provide banking services. This is significant because a 2016 report found that Nigeria lagged behind African peers such as Kenya and Tanzania based on financial inclusion metrics. If we were to compare these economies based solely on GDP figures, Nigeria would likely come out on top, even though our banking system only serves about 30% of the adult population.

Therefore, as we have seen, delivering double-digit growth is only half of the government's homework, particularly because GDP can make progress appear larger than it is. If Buhari does meet his growth rate target, we should also want to know how many Nigerians are enjoying this new wealth? And to what extent did government policies play a role in this? These are the questions economics metrics ignore, and which require a broader approach. 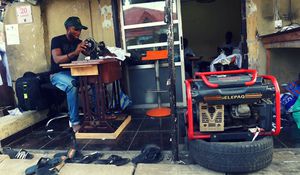 SMEs and Alternative Power for Nigeria 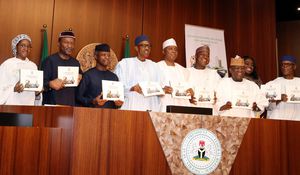