Flashback to 2003 Elections: The Numbers Game

Stears continues with its recap of previous elections by looking at the dramatic 2003 edition.

Four years into the Fourth Republic, Nigerians went to the polls to pass their judgement on the Obasanjo administration. It was the first time since 1964 that a party was defending its mandate at the polls, and Nigerians learned the true power of the incumbency. The 2003 elections, widely considered to be heavily-rigged, resulted in a party with all the power and none of the plans.

The Obasanjo government has not been as successful as some hoped, encouraging many challenges to his rule in 2003. One of them was a gap-toothed ex-General whose party had snatched the former Senate President as his running mate.

Nigeria's democracy was at stake, with the Executive arm exuding dominance over the Legislature. As a result of political machinations within the ruling party, Nigeria had lost a lot of leaders in the legislative chamber during Obasanjo’s first term. Salisu Buhari departed as Speaker of the House, while the Senate lost two presidents after the removals of the late Evans Enwerem and Chuba Okadigbo.

And beyond our borders, Nigerian troops were involved in ECOMOG's campaign during the Liberian Civil War, and the government had lost Bakassi to Cameroon.

This was our first sighting of “reformed democrat” Muhammadu Buhari, one of three former military leaders contesting the 2003 elections, alongside the incumbent Obasanjo and APGA’s Odumegwu Ojukwu. But it was the incumbent who steamrolled through the polls as the opposition parties performed poorly, leading to accusations that Obasanjo was trying to turn Nigeria into a one-party state.

Depending on who you speak to, this was the beginning of several important developments in Nigerian politics. First, we saw increased attention paid to gubernatorial elections as the PDP targeted vulnerable incumbent governors, managing to take over all the states in the South-West, bar Lagos. Second, many trace the hostility between President Obasanjo and his deputy, Atiku Abubakar to this election, amid rumours that Obasanjo was forced to kneel to beg Atiku. This led to a sustained campaign against Atiku that only stopped in 2018 ahead of the 2019 polls. Finally, 2003 was also one of the first recorded instances of electoral violence in the Fourth Republic. 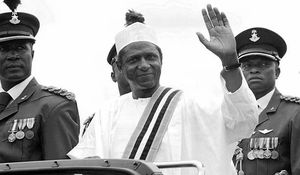 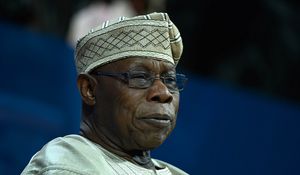 Flashback to 1999 Elections: From Prison to Presidency