In 2011, after a year marked by the Arab Spring, Occupy Wall Street and Russian rallies, TIME magazine named “The Protester” as its Person of the Year.

2020 might be another such year. There have been protests in Hong Kong, America, Chile, Thailand, Namibia and Lebanon, to name a few. Mass mobilisations have occurred in democracies, budding democracies and non-democracies. Around the world, protesters have taken to the streets in the name of corruption, economic injustice, racism and of course, police brutality. Some protests have driven political leaders out of office; others have triggered harsh government reprisals.

Protests are now a part of global politics.

To their credit, protests work. They have brought socially and economically marginalised groups to the forefront despite institutional suppression in the United States. In Serbia, they have changed politics by elevating the injustices within local communities.

Even in Nigeria, we have seen protests work in cases of the Nipost Fee and Not Too Young to Run. Protests, peaceful ones especially, work well because they bring together a wide coalition of people who may not be affected by the issue but acknowledge and sympathise with the group pushing for the issue.

Admittedly, in some cases, protests sometimes fail to leave behind any lasting change, or worse, do more damage than intended. As an example, President Trump dealt the Women’s Day March of 2016 a crucial blow as he went on to cut reproductive rights funding for domestic and foreign recipients.

Protests often create momentum for causes but do not replace the legal reforms and lobbying required to make change possible. For instance, we fondly remember Dr Martin Luther King’s ‘I Have A Dream’ speech as a historical moment in the US Civil Rights Movement, but it was only a part of a bigger campaign for the civil rights reforms that followed. It was two years after the speech that the Voting Rights Act of 1965 suspended the use of voter qualification tests which had been used to disenfranchise African-American voters.

The reality is that while protests lead awareness about important issues, they are not all that is required to effect change. Therefore, now is the time to build out the future of Nigeria’s protests.

As the #EndSARS expands from Twitter timelines to the forefront of the political and economic agenda, we need to begin to think of the second chapter.

For a protest to lead to lasting change, the demands must be clear and difficult to ignore. Research has shown that the government is less likely to ignore a very loud and persistent group of protestors with a very clear list of demands. Examples of this include Nigeria’s NotTooYoungToRun which demanded changes to the age limits for electoral office in Nigeria,  #OccupyNigeria which demanded a reduction in fuel price and the student-led March for Our Lives in Florida which demanded the tightening of Florida’s gun laws.

The benefit of a list like the #5for5 is that the demands resonate with the non-millennial demographic. Successful movements have a way of focusing their messaging on issues that affect a wide range of people while inviting them to learn more about the cause itself. Part of the #EndSARS success happened because non-protesters at home and outside the country bought into the movement.

Why? Because ending police brutality is a universally applicable and acceptable message. This is not an ‘us’ against ‘them’ issue. We have all been affected by bad policing.

Now, what does this mean for #EndSARS protesters?

The current list of demands focuses mostly on police reform. But the protests have become about much more than EndSARS as #EndBadGovernance is now starting to trend. As the movement organically grows beyond police reform, the original 5for5 list may cease to be a fair reflection of demands in the minds of the people. Addressing this will require action.

One approach is to articulate a list of demands that go beyond police reform and focuses on bad governance. This will preempt a situation where demands do not match the protests.

This list of demands could cover social, economic and political reform. It could range from policing to civil service, elections to media and even business reform. After all, economic reform affects us all, and demands like increasing the national minimum wage, improving the quality of education and reviewing the salaries of legislators are all on the table.

An example of a protest group that has been able to do this successfully is the Movement for Black Lives coalition. The movement has successfully expanded beyond police brutality to demanding better social, political and economic opportunities to tackle institutional racism in the United States. Doing this has allowed them to push the conversation forward and secure buy-in from other interest groups around the world.

This is an option for our movement, yet it is not the only option.

In the movie On the Basis of Sex, Felicity Jones playing the late Ruth Bader Ginsburg states: ‘Protests are important but changing the culture means nothing if the law doesn’t change’.

For there to be a tangible change in the way a society functions, the laws and policies that guide it have to change. If #EndSARS protesters want the police force decentralised, we need to make sure that our decision makers understand why this must happen and are ready to act on it.

As an example, the new Police Establishment Act which was signed into law this year, clearly states that suspects are to be informed of their rights to remain silent and have access to legal counsel whether private or state-appointed.

Concerted action targeting the enforcement of this law would allow the government to meet the #5for5 demands of the #EndSARS protesters. However, reports by the BBC show that these laws have not been implemented or enforced within the Nigerian Police Force.

For the #EndSARS protests to go the distance, we need to demand that those in positions of power enforce the laws that they have already set, while those responsible for lawmaking focus on making the right ones. Accountability is key.

In 2019, Tobiloba Fadesere wrote for Stears Business on how the lack of attention given to local governments made them less accountable and more impotent. Nigeria has 774 local government areas, each one listed here plays a key role in every activity from coordinating sewage and refuse disposal, registering births and deaths to regulating public spaces and businesses, as well as making recommendations on economic policy.

We need to become a part of the political process that holds these leaders accountable. As a matter of fact, we need to vote.

For Nigeria and the #EndSARS protests, this turnout needs to increase dramatically. Voting for people who understand and are committed to meeting the needs of the #EndSARS campaign will ensure that the long-term police reforms are implemented, and other wide-ranging reforms get necessary attention.

Put another way; we need to move the protests from the streets to the polling booths if we want to see substantive change. INEC has a list of polling units in the country. We can vote or register to vote at these locations.

At the end of the day, Nigerian power is largely political. And so politics is inevitable if change is the goal. Right now, LawPadi.com provides detailed guides for anyone who would seek to run for office. Everything from age limits to the state of a candidate’s mental health. We can enjoy the benefits of the successful NotTooYoungTo Run campaign, while also setting the direction for our future.

Protests can lead to lasting change

Protesting is a form of expression about the discontent of the disenfranchised and oppressed. But it is not the only step required for long-lasting change.

The question now is how do we prepare for the inevitable transition from Twitter to rooms where decisions are made?

There is an urgent need to stand firm with our list of demands. #EndSARS will not stop pushing for police reform, but as the movement expands to other facets of society, the people must be ready for clear legal, political and economic reform.

#EndSARS protesters can hold politicians accountable while in office. We can start here. #EndSARS protesters must vote for candidates who support police reform. We can continue here. The latter is important because voting pushes the agenda for change and reform further as it makes sure the voice of the electorate is heard.

In a TedEd talk titled ‘How to Turn Protest into Powerful Change’, Eric Liu narrates two key things protesters must do to ensure lasting positive consequences for protests.

First, they must expand the frame of the possible, which means refusing to accept that the basic things they want are not possible. The #EndSARS movement has already refused to accept the ‘re-disbanding of SARS’ and demanded stronger and more targeted action.

Second, they must pick a defining fight, which means focus on a few specific goals. For the #EndSARS protesters, that fight continues to be police reform but is already organically growing.

So far, the #EndSARS protests have been on a clear path. But the next steps we take will determine how far this movement will go in changing our society. 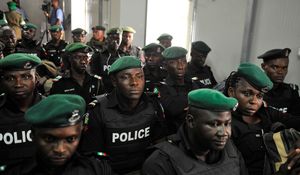