The National Bureau of Statistics (NBS) released the GDP report for the fourth quarter (Q4) of 2020 on Thursday and it is pleasantly surprising to see that Nigeria is out of its recession.

It also seems to have made what looks like a V-shaped recovery, but it has not. 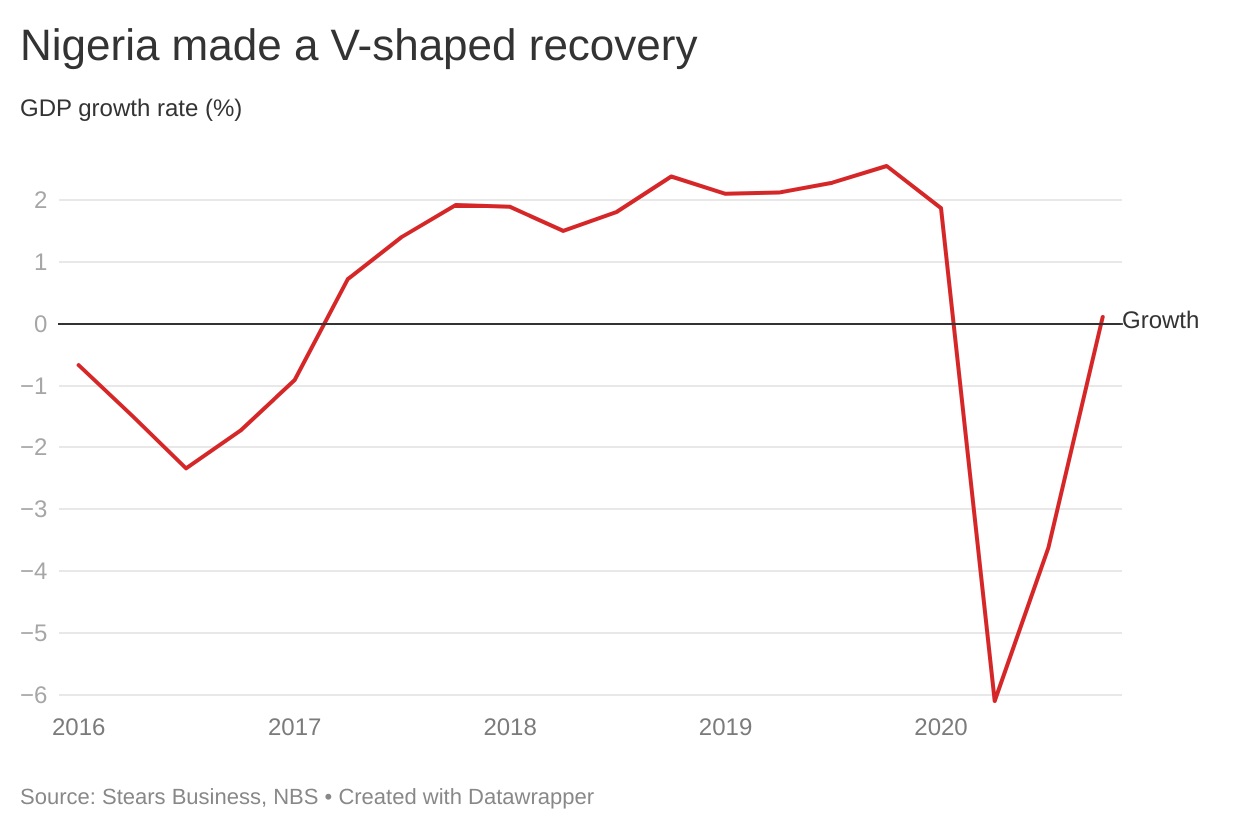 As highlighted in this article, a V-shaped recovery happens when the economy self-stabilises, and returns to its pre-pandemic position, which in Nigeria’s case will be a 1.9% growth position.

However, what we have is a 0.11% GDP increase. But it appears that Nigeria may have met one of the assumptions of a V-shaped recovery, which is that the economy became self-stabilised.

Since the recession was driven by lockdown restrictions, supply chain disruptions, oil price and demand drops (which affected the government’s revenue), the economy needed to get back up by reversing these conditions.

The government got loans from the International Monetary Fund, the World Bank and the Central Bank of Nigeria during the year.

Then, in Q4 vaccines were approved and countries had started opening up even though there was fear of a second wave. Oil prices also increased to about $48 from negative prices in the second quarter.

Nigeria was back in business, sort of. The economy had somewhat self-stabilised back to growth. But what led to this growth? Let’s dig deeper.

The first thing is communication!

Since the pandemic meant social distancing, many companies had to switch to remote working. This improved the already strong growth in telecommunications and Information technology to 13% from 11% in 2019.

ICT’s contribution to GDP thus increased from 10% in 2019 to 12% in 2020. Although Q4 GDP growth was lower than Q2’s, when there was a lockdown, it was much higher than pre-pandemic levels. 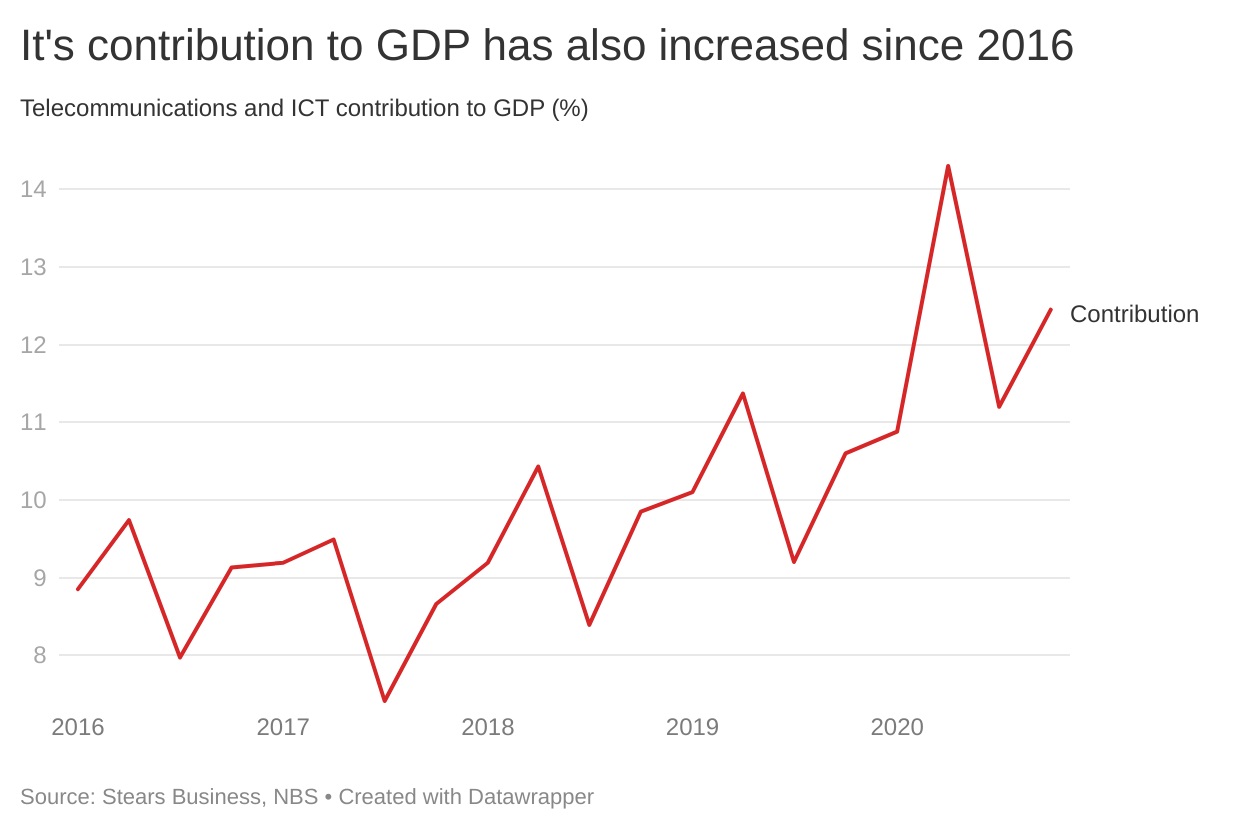 As businesses began to open up again, growth in telecommunications and ICT reduced slightly in Q3 and Q4. Although it remained strong.

As usual, the agriculture sector played a part in the GDP increase. Being the largest contributor (24%) to GDP, growth in the sector is highly significant. Throughout the year, agriculture grew by 2.2%, slightly lower than it did in 2019 (2.4%). 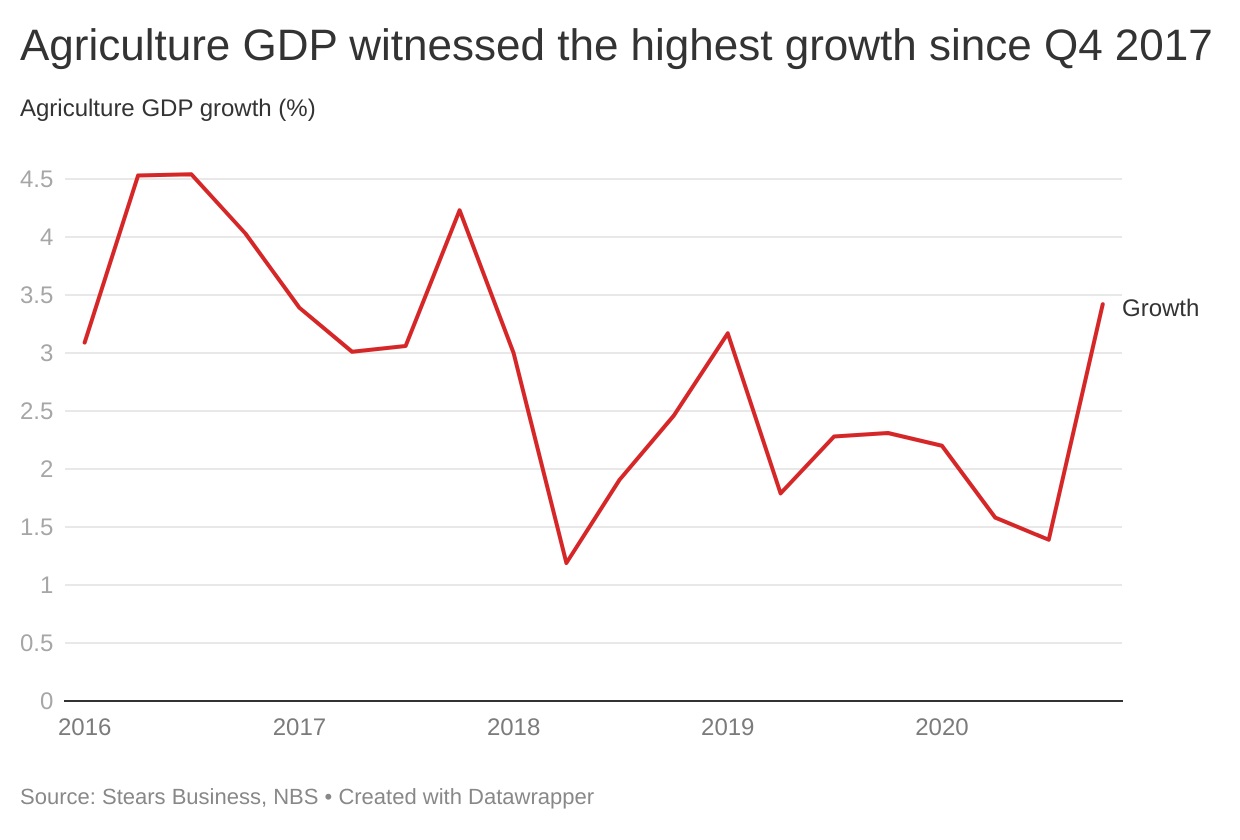 The second-largest sector, domestic trade—which covers all forms of retail and wholesale trade within the country, and makes up 14% of total GDP recorded a -9% growth in 2020, from -0.38% in 2019.

This was partly because of the lockdown and low income of consumers which led to a 17% and 12% decline in Q2 and Q3 respectively.

In Q4 however, due to the festive season and the economy returning to normal, it contracted only by 3%. 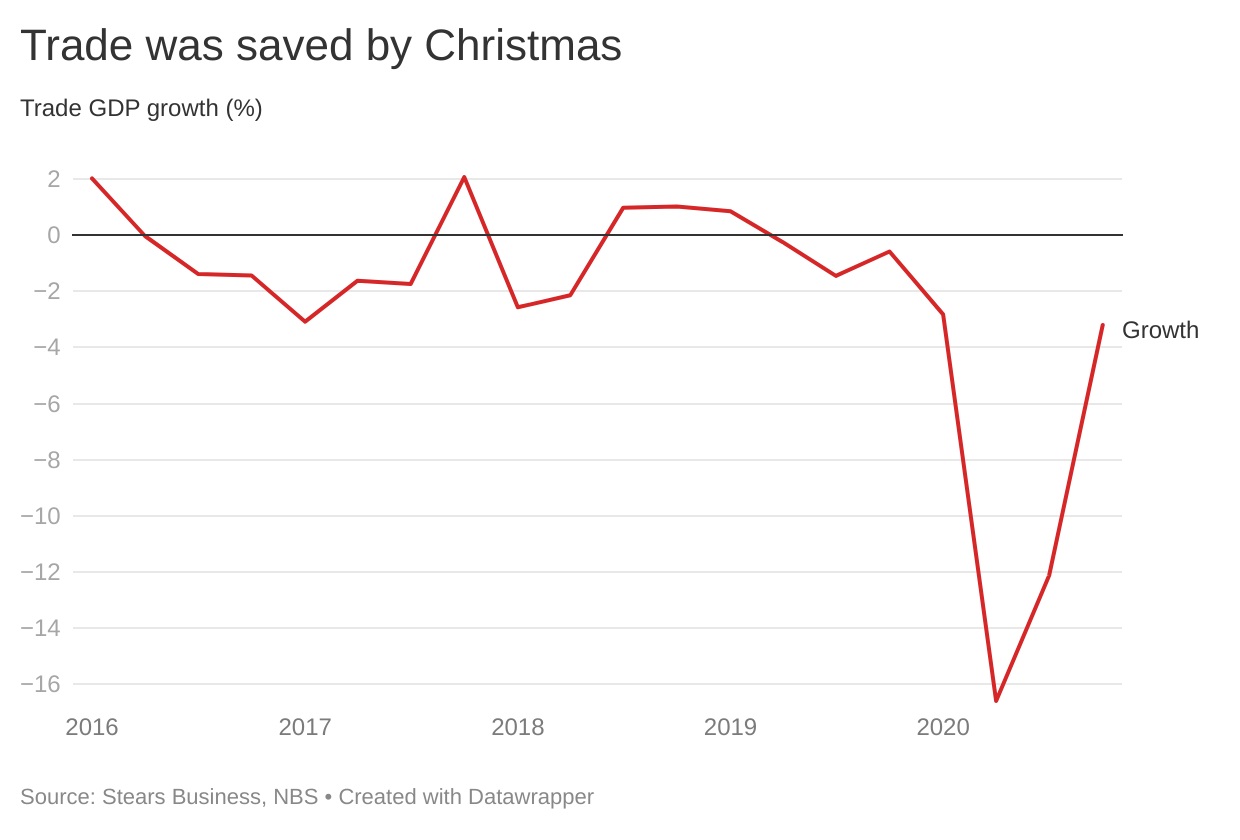 Finally, the major victims of the pandemic like accommodation and food services, education and transportation suffered the most throughout the year and even during Christmas.

Several businesses in the accommodation and food services sector attempted other channels of sales, but that was not enough to salvage the situation.

Not only was there a fear of a second wave of Covid-19, consumer income was also low. And as we saw in 2016, when there was also a recession, whenever income reduces recreation suffers too. Afterall, there’s rice at home.

This drove the accommodation and food services sector to average a negative growth of 18% in 2020, from a 2% growth in 2019.

Education, as we know, was badly hit because schools had to be shut for the year. The entire sector shrunk by 14% compared to 2019.

However, just like other sectors, the last quarter of the year was not so bad, as schools were able to put protective measures in place for resumption. Still, the sector experienced an 11% contraction.

Transportation also felt the heat. There were international border restrictions.

So while the sector raked in 22% less output than it did in 2019, some of the sub-sectors were much worse.

Road transport recovered in the last quarter of the year, reducing the depression in the sector from -47% in Q3 to -1% in Q4. All other sub-sectors recorded negative growth apart from post and courier services because many companies had to rely on delivery services last year. 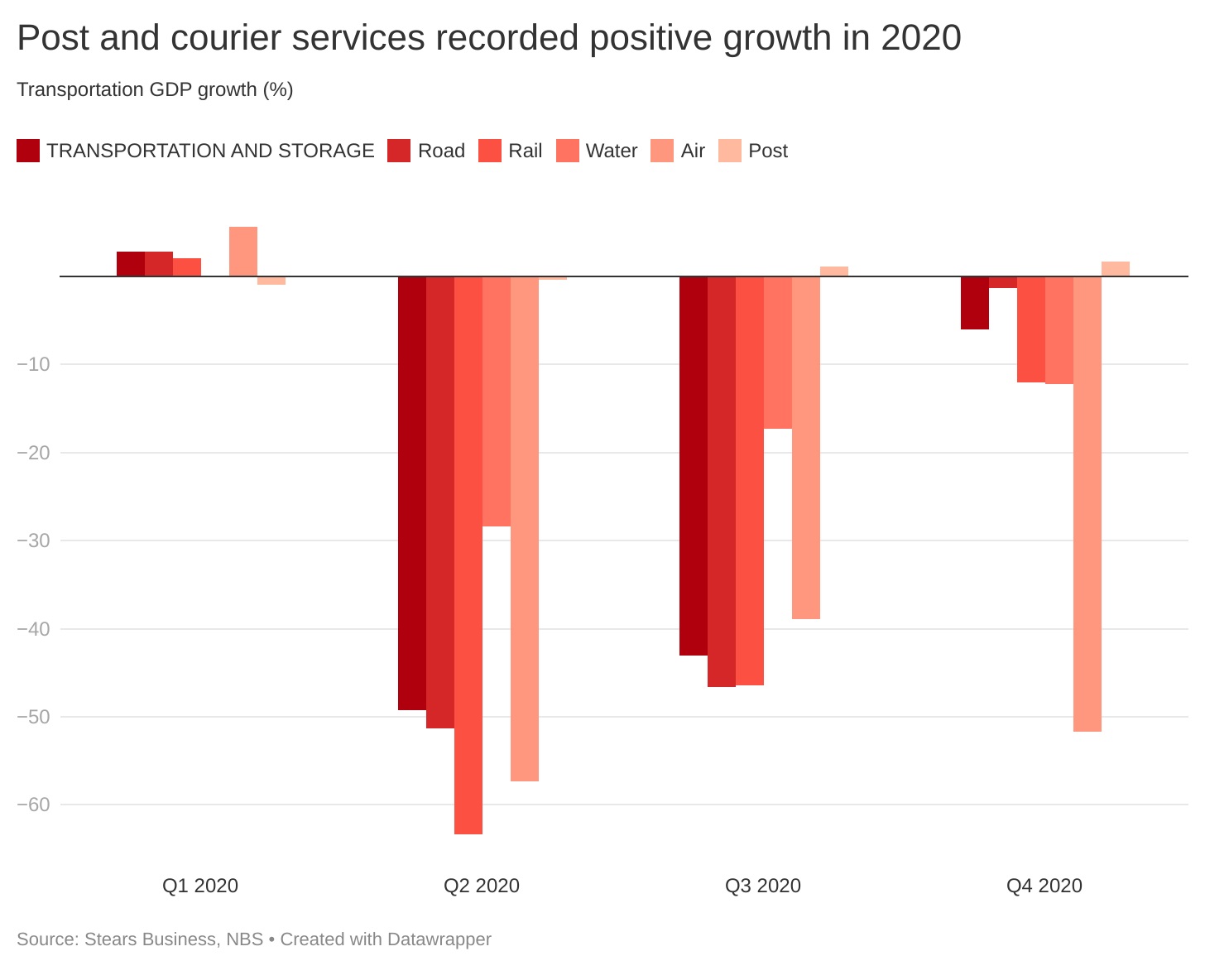 Contrary to expectations and forecasts by many, that the economy will recover from the recession in the second quarter of 2021, it appears that Nigeria has shaken off the recession much faster than usual.

This quarter, oil prices are up and business is back to usual. However, issues like farmer-herdsmen conflicts, increased fuel and electricity tariffs threaten inflation and the income of consumers across the country.

When consumers are unable to make enough money, they cut down spending and businesses suffer from low consumer spending. This threatens Nigeria’s growth for the rest of the year. But just like the Q4 2020 GDP growth was a pleasant surprise, maybe the Nigerian economy has more surprises up her sleeve. 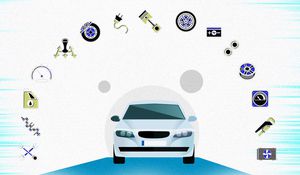 1970s till date: The burns and bruises of Nigeria's car manufacturing industry 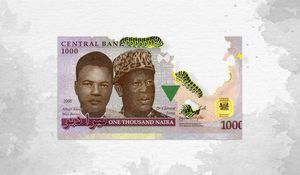 Why Nigeria always has inflation