How do Nigerians decide who wins their votes in elections?

If all goes as planned, Nigerians will go to the polls next February to decide who they want in various elective positions. Ahead of this, some have rallied others to get their permanent voters cards (PVC).

In the build-up to the elections, we tried to get a clearer picture of how the voting process works, who the voters are, and what shapes their voting decisions.

Who are the voters?

Anyone above 18 years who has registered is allowed to vote on election day. Data from previous elections suggest that actual voters are primarily from more impoverished regions or part of the informal sector. During the 2015 Presidential elections, the bulk of the accredited voters were from the poorest states. Jigawa, Katsina, and Plateau, all ranked in the ten poorest states, with poverty rates above 70%, had the most people participating in the electoral process.

Hakeem Adelaja, who has worked on four of Nigeria's State and Federal elections says that compared to the educated middle and higher class, artisans, teachers, transport workers, farmers, etc. show up more on election day. “I have been in charge of campaign management and election monitoring a couple of times. There’s a voting pattern; the lower class are the voters. You hardly see the middle class or higher middle class at the polling booth. It’s hard to tell they exist in the electoral process,” he says.

Part of this is base effects i.e. these states are simply more populated, but poor states are better represented even on a proportional basis. We can see this by looking at PVC collection rates (which allows us to control for population size). Again, the data here is overwhelming. 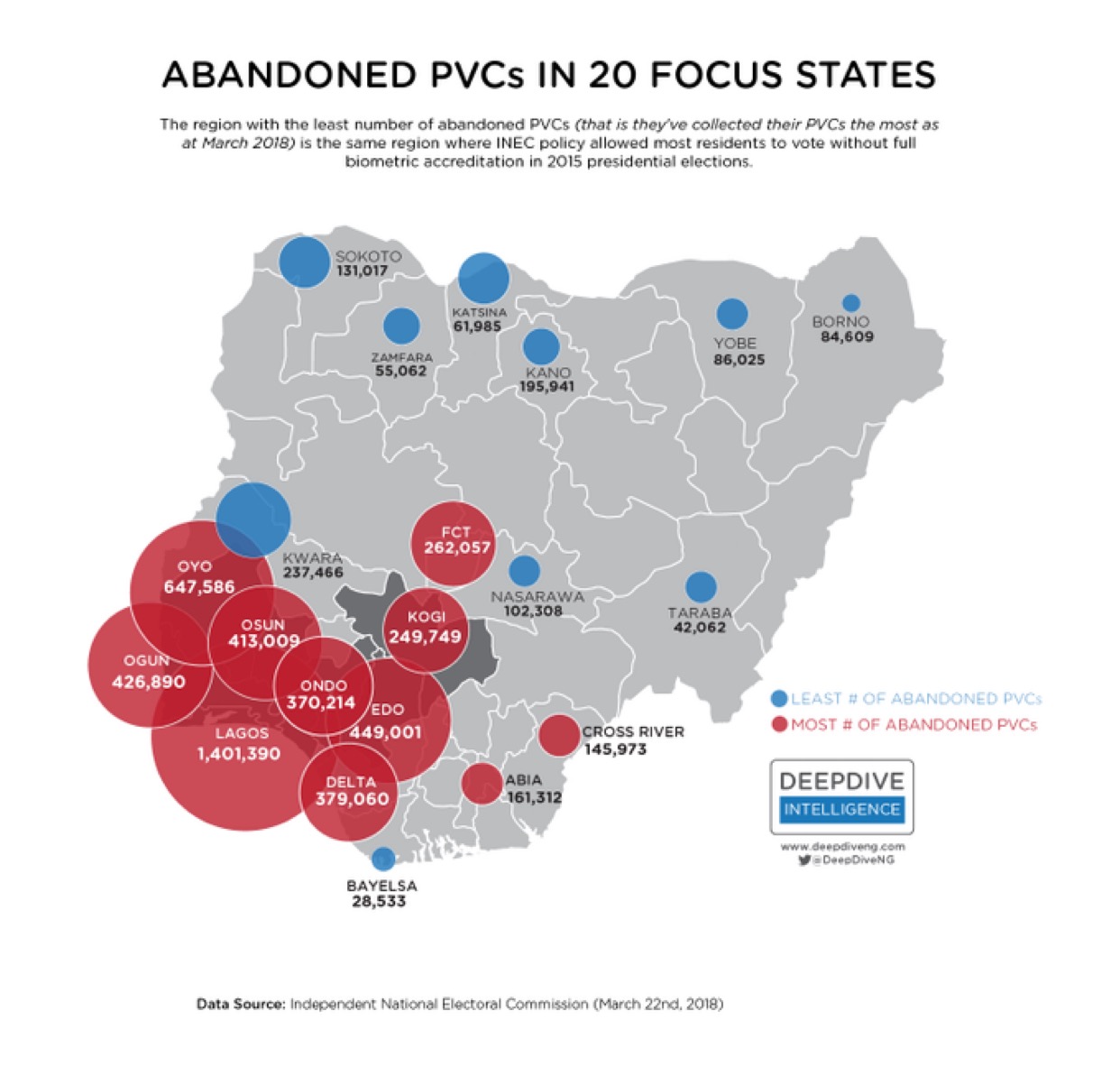 As the graphic shows, Nigeria's richest states have lower PVC collection rates. Edo, Lagos, Delta, Osun, Ogun, and Oyo, all with poverty rates below 30%, do not seem as interested in exercising their democratic privilege and obligation.

What do voters consider?

Voters consider many issues when deciding who to vote for, and these issues may differ according to the level of government. A person voting in the Osun State gubernatorial race would consider different factors from one voting in a local government election in Katsina State.

However, some considerations cut across all contexts. One of these is the candidate's relatability, and his perceived closeness to the average voter as Nigerians believe that those who relate well with people lower down the chain will seek their best interest when voted into power.

“The voters always consider someone that plays on their level. So, it is important to work and move with the artisans, transport workers and farmers. Anyone that appears too elitist will not get votes because people will assume he does not understand their needs and cannot relate to their everyday reality,” Hakeem explains. “If a candidate feels like he cannot associate with people at the grassroots, then he must get those that represent him to do so,” he adds.

We have seen this play out before. In the 2014 Ekiti State elections, incumbent governor Kayode Fayemi was comprehensively beaten by Ayodele Fayose who won all the 16 local governments in the state. While Fayemi was accused of being elitist and out of touch, Fayose had earned a reputation for mingling with the masses and was seen as a true man of the people.

Parties also play a significant role in Nigeria's democratic machinery. An unpopular candidate may sneak through as part of a political structure that people are sympathetic to. In the South-West, Lagos State's synonymity with the All Progressive Congress makes it unlikely that a candidate from another political party would amass the votes need to topple a party that residents of the state have grown to trust.

Finally, Nigeria's status as one of the poverty capitals of the world leaves its democratic process susceptible to stomach infrastructure politics. The reality is that for too many voters, financial incentives hold the biggest sway in their voting decision. In short, their vote can be bought. You just have to know their price

How much does a vote cost?

Money, food, transformers, even the promise of jobs. These are all things that candidates have successfully used to sway voters. Candidates prey on the poverty and need they ought to be addressing. “These people do not earn much or don’t earn at all and have immediate needs to sort. Accepting cash or food, which fall within their basic needs in exchange for votes is a viable option for them,” Hakeem asserts.

And this does not even include the direct money-for-vote exchange that has dominated Nigeria's democracy. Or the more subtle, more arguably dangerous reality of people voting for the candidates that they hope to gain financial benefits from in the future, perhaps through contracts or government positions.

Apart from stomach infrastructure and outright graft, voters are also swayed by religion and religious leaders. Religiosity is a key component of Nigeria’s identity – a 2015 global attitudes survey says 85% of Nigerians are religious – and this affinity for religion trickles into the political space.

Hakeem opines on how religion plays a role in changing the mindset of voters, “From experience, I can tell you that people will gladly give up their votes for religion. A lot of the time, pastors and Muslim clerics influence the choice of the voters.” He continues, “A pastor somewhere can dig up something from the scripture to justify voting for candidate A and believe me the entire congregation will vote for A and convince others to do so.”

The 2015 Presidential elections offer a recent example. The build-up was characterised by a notable religious rhetoric in campaigns with Christian leaders urging congregations to vote for Goodluck Jonathan for being Christian and Muslims pushing for Muhammadu Buhari because he is a Muslim.

Understanding why people vote and why they choose particular candidates gives political aspirants and campaign planners a chance to tilt their election strategies towards what voters desire. In a sense, it is Nigeria's version of populist politics, but rather than proclaiming their support of anti-immigrant policies or tax cuts, politicians give Nigerians what matters most to them: a sense of closeness to power, financial security, and religious affirmation.

Whether we are content with this democratic status quo is up to us, but it serves to remind us that voting is not enough, we must ask people to vote well.