“What happened to Lagos? The size of our economy today is as large as the entire economy of Nigeria in 1999, yet we cannot boast of the sort of infrastructure that is worthy of a megacity of our status. Think about that for a second.”  – Jimi Agbaje

Mr. Agbaje’s tweet pushed me to think for a little more than a second. In fact, it pushed me to finally pull the data and examine some of the hypotheses I had laid out to some friends a few weeks prior during a discussion on whether Lagos State performs as well as the hype suggests. The focus of this particular conversation was the state’s finances; the question of why the state’s infrastructure struggles despite the seemingly robust finances from substantial internally generated revenues (IGR), federal allocations, and debt.

My position was that the state doesn’t quite pull its weight, but that the shortcomings were (at least partially) due to structural problems rather than a lack of will on the government's part. In this two-part series, I will be taking a closer look at the macro picture of Lagos’ financial position to tease out some answers to the question posed above.

With a GDP that places it in the top 10 economies in Africa, and a population larger than New York’s, Lagos State plays an outsized role in Nigeria’s economy. Bustling with energy, it is a place where even the mundane can become newsworthy, a place where the usually boring topic of public finances gets mainstream attention. The quantum that Lagos raises and spends is subject to commentary and controversy; with the opacity of the budget and controversies around tax collection being the more common topics.

Of course, raising money is not an end unto itself, and these discussions are embedded in a broader development agenda that has an underlying assumption that the more money you raise, the more you have to spend on public goods like infrastructure, education, and healthcare.

There are two ways of looking at Lagos' internally generated revenues (IGR). The first is to argue that Lagos State outperforms, managing to raise far more IGR than the other states, generating more than a third of the IGR of all Nigerian states combined (Figure 1). This is the simpler position. A second, slightly more nuanced school of thought suggests that Lagos IGR performance is unimpressive once you consider the size of its population and economy. In other words, we should not compare Lagos to other states, but judge it in terms of how much it ought to be raising. 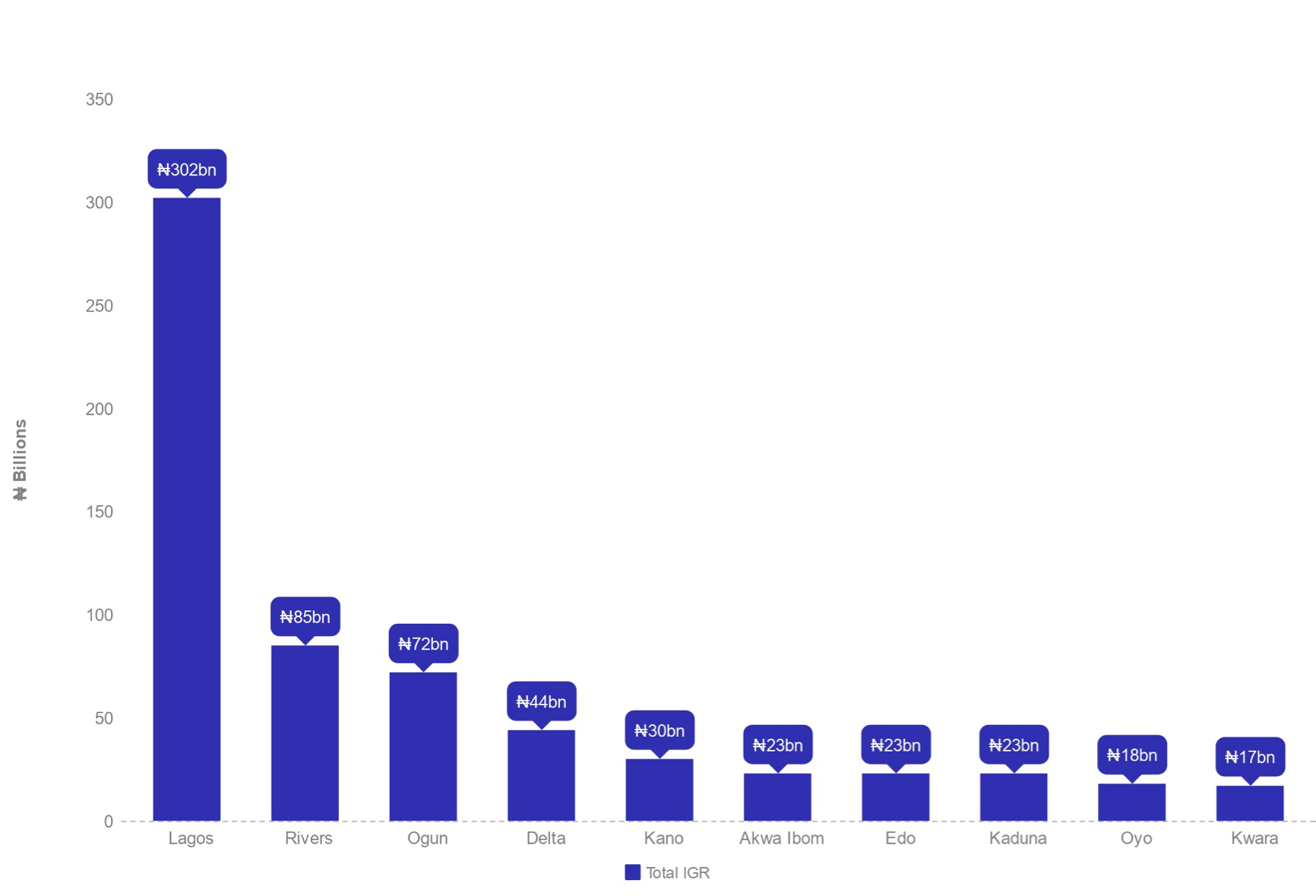 Population and GDP statistics offer up ways to evaluate the second position. One approach could be to calculate the IGR per capita in each state, a measure of how much the government is able to raise in taxes per resident. While simple mathematically, this approach is beleaguered by the famously unreliable state level census data. Figure 2 presents a ranking of states by IGR per capita and shows that Lagos still tops the league table, generating almost twice as much in taxes per person than its nearest challenger, Ogun State. 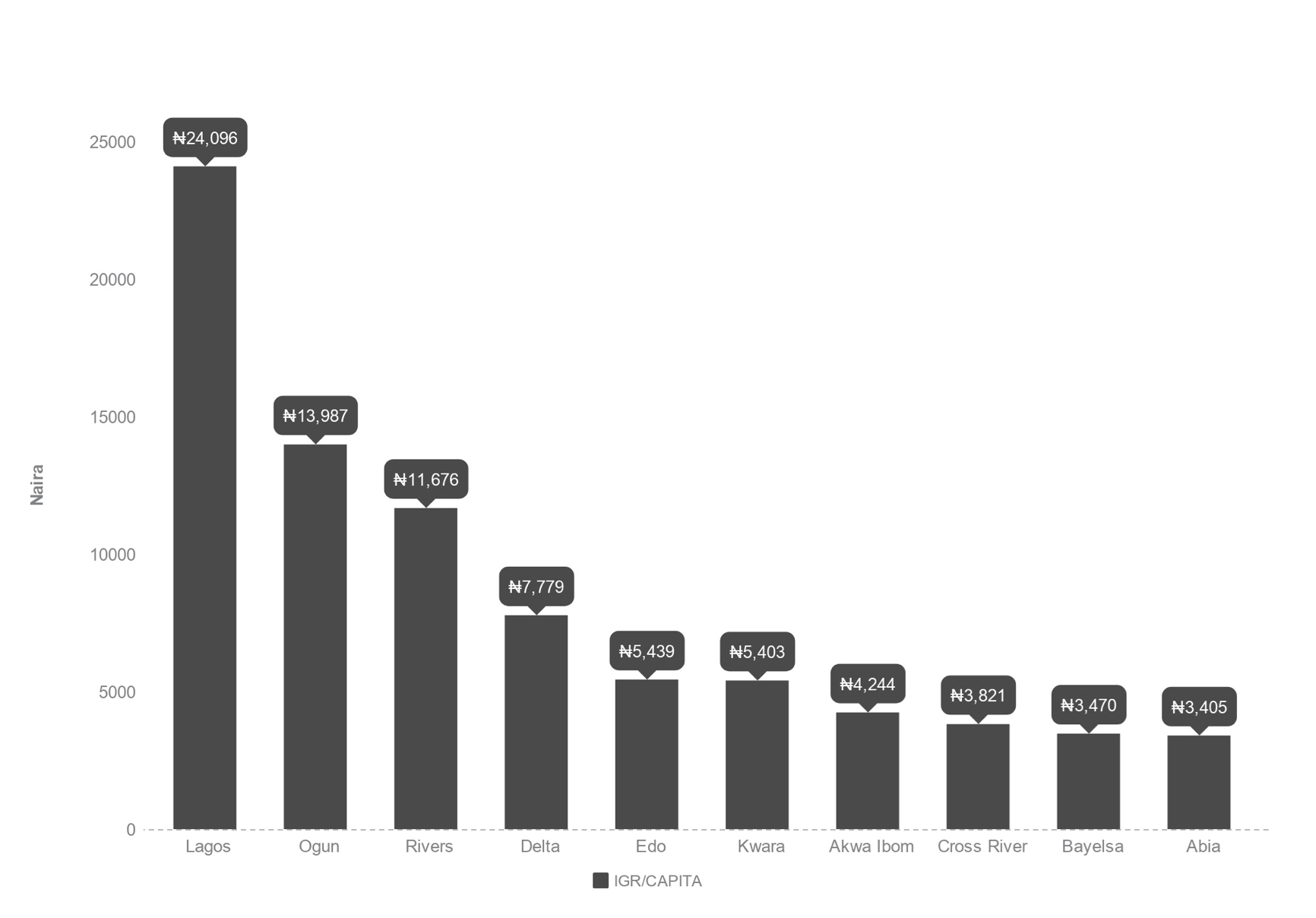 Show me the (real ) money

But a measure based entirely on population is a little too simplistic as it only accounts for one factor of production—labour. In reality, the output in any economy combines labour with capital, natural resources, and entrepreneurial know-how. Hence, any reasonable comparison of IGR should factor in a measure of output like GDP. As we do so, we will see whether Lagos' impressive IGR is a feature of its significantly larger economy.

Fortunately, the National Bureau of Statistics (NBS) recently released data on ten state GDPs in Nigeria. Combining this with an estimate for Lagos State’s GDP from press reports (₦40 trillion) allows us to run a limited comparison (Figure 3) which paints a very different picture from the previous charts. The real star of the show appears to be Ogun State, which manages to raise far more as a proportion of its economy than the cohort under examination. And even if we use a much more conservative GDP estimate for Lagos—say ₦30 trillion—it only goes past Cross River and Kaduna in the ranking. 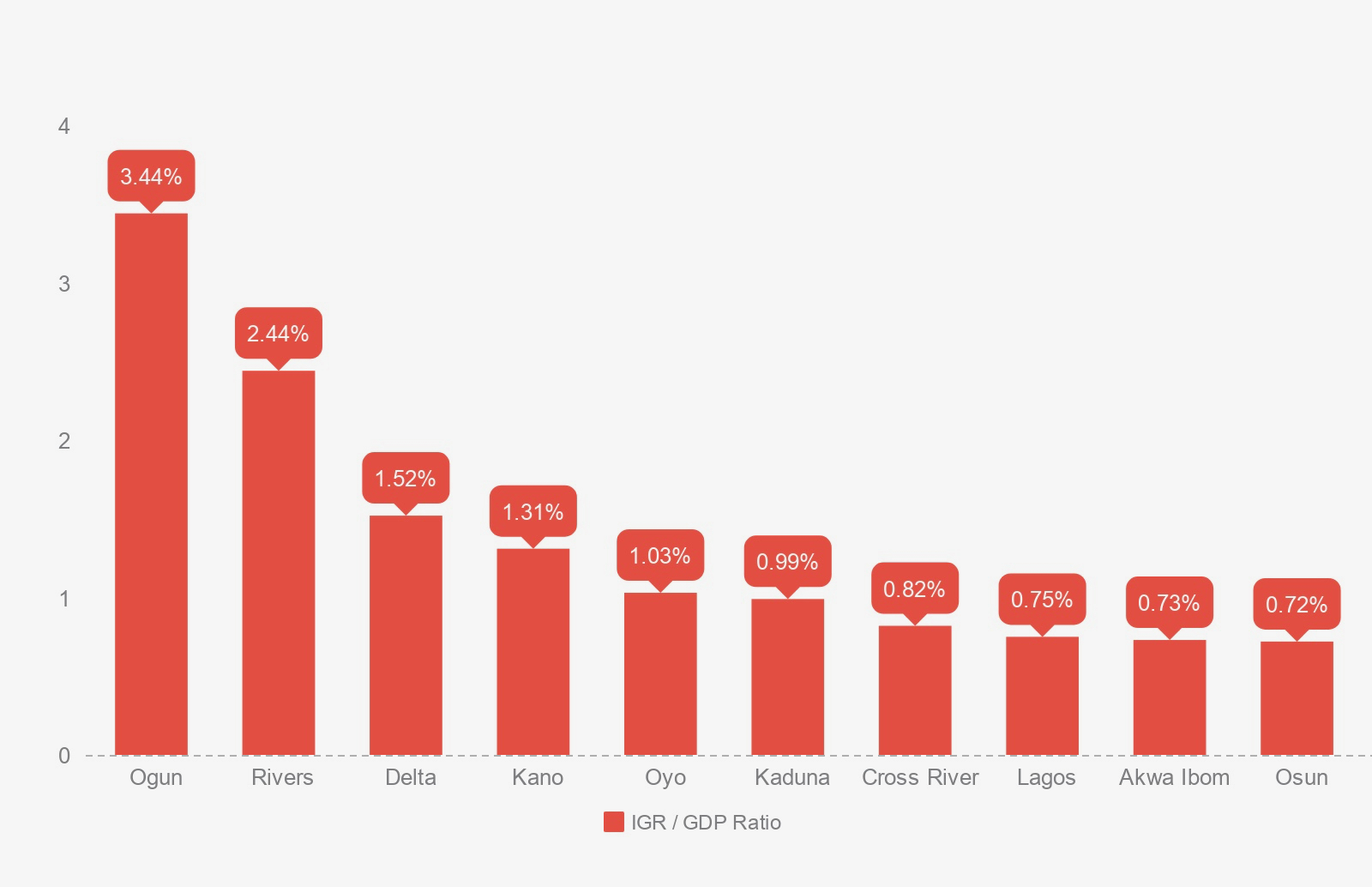 It seems then that we have arrived at some preliminary answers to Mr. Agbaje’s original poser. The state’s large GDP hasn’t translated to into as much revenues as you would expect. Even after we add federal allocations, Lagos still raises less than 1.5% of its GDP. Barely exciting. If Lagos State performed even as well as the Federal Government, whose tax to GDP ratio of 6% puts it near the bottom in the sovereign rankings, Lagos would raise at least six times more internal revenue than it does. This is money that could be put towards providing better infrastructure, education, and healthcare for the booming population. In the second half of this two-parter, I will examine some ideas on why the tax take is so poor, an issue Mr. Agbaje and his team ought to be considering strongly if they plan to win Lagos in 2019.

This article is Part I of a Series. Read Part II here.