“Of the thirty people in his household, only the Oba and his Olori came out to vote,” an animated Chisom Nnaukwu* tells me, holding his phone in one hand and clutching an overhead grab-rail inside a Lagos BRT with the other. Stationed at the Oba of Ago-Iwoye’s palace in Ogun state, his experience as an INEC ad-hoc staff for the 2015 elections left an indelible mark on his views of youth participation in elections.

Well over a quarter of Nigeria’s population is aged between 18 years and 35 years, a large enough number for President Muhammadu Buhari’s cringe-worthy comments on “lazy” Nigerian youth ought to be considered catalytic of an imminent defeat at this month’s polls.

In reality, many young people will fail to translate their uproar to retribution on the ballot. But why would a PVC-carrying youth, discontent with the status quo, fail to vote—or vote against the longstanding political elite? How can we know the precise scenario we do not desire and fail to stop it?

Bounded rationality is a concept derived from economics, which describes the limits of human reasoning. People are usually considered to be rational, but evidence shows that our decisions are flawed, inconsistent, and irresponsible, all in systematic ways.

One common way this manifests is how we make decisions based on limited information. In a country like Nigeria, information is encumbered by filters that influence perception and reception. Low literacy levels, prevalence of bigotry, and a persistent mistrust of data mean that public choices are often made in irrational ways.

Is that changing with the 2019 elections?

A decade ago, President Umaru Musa Yar’Adua’s seven-point agenda was known in name but its targets were not interrogated before election. In 2019, all five candidates invited to the presidential debate have at least one policy document available online. A voter in 2019 can read Kingsley Moghalu’s Big, Innovate and Grow, or Obiageli Ezekwesili’s Project Rescue Nigeria, comparing their ambitious targets to Buhari’s Economic Recovery and Growth Plan.

But crisply written manifestos are not new. Availability has not always translated to adoption. Forty years ago, Obafemi Awolowo’s Unity Party of Nigeria (UPN) laid out its four policy thrusts but lost to Shehu Shagari’s National Party of Nigeria (NPN). Returning to democratic rule after decades of coarse command-and-control decision-making eroded esteem and reliance on evidence, profound commitment to objectivity remains elusive.

Moreover, technology is quickly bridging data and information gaps around the elections. Even beyond the Stears Election Centre, applications like Know Your Candidate, developed by Civic Monitor, compare the stances of twenty-four presidential candidates on issues ranging from restructuring to power.

“We keep saying the next elections should be about issues, but then we start talking about who has the most media presence or who has the most money,” Stanley Azuakolam, Founder of Civic Monitor, tells me in a phone interview.

On the platform, a randomisation mechanism re-arranges the grid placement of candidates every time the home page is refreshed, as one of a number of deliberate features designed to make the user confident of the platform’s objectivity and non-partisanship: “We settled on taking away anything that could put a bias on people’s minds, including summarizing candidates’ positions. We used their exact words.”

Don’t be distracted: the Nigerian considers certain factors before deciding to vote. So, what influences that factors that people consider in the voting process?

Chisom points to July 2017 Local Council elections in Lagos marred by violence as one reason politically active youth on social media stay away from polling units. “The more cautious you are about losing your life”, Chisom says, “the less likely you are to vote.”

This is an example of availability bias; because violent incidents are likely to be reported and widely shared, people consider them to be more frequently occurring than they are. To use a famous example, four times as many Americans are killed by vending machines than by sharks each year, yet you don’t see many public scares about vending machines.

And when Chisom declares that “70% of Nigerians on YouTube will not vote” as a response to my suggestion that Omoyele Sowore has enough online followers to win his polling unit at least, he was not stating a fact; he was simply reproducing bias arising from popular repetition, true or not.

Another critical determinant is anchoring. “People think even before the first ballot is cast, politicians have determined what the result must be,” Chisom adds with a sigh.

Essentially, when considering how to vote, people begin with a clear assumption of the eventual outcome, and this shapes how they decide to vote. You see this in the criticism that those who support third-force candidates are “wasting” their votes, a peculiar kind of loss aversion that convinces many to pitch with one of two leading candidates, regardless of their satisfaction with the political elite.

In a sense, some voters may not be “deciding” on a candidate but rather “opting” for one—a distinction borrowed from the Israeli philosopher Edna Ullman-Margalit, for whom opting is “what we do when we shift our values instead of maximising them”.

Our beliefs about elections in Nigeria are products of framing and priming. Framing effects are not easy to break off; they reproduce cycles of belief that reinforce each other in succession. For example, the framing of Buhari as an embodiment of anti-corruption was extended to his family when his son ‘fell from an Okada’ late in 2017 (fact check: false, obviously). It drew sympathy to his “poverty” in his key support base at a time when enthusiasm seemed low.

Locked into that picture, it becomes believable that Buhari could not afford his nomination form. As such, he deserves to return, and anyone standing in the way automatically represents “corruption fighting back”.

My Values, My Reason.

Ultimately, the starting point for overcoming biases is education, because whether it is ethnic bigotry, availability bias, or framing, Nigerians need to stop making irrational decisions at the polls. The price of irrationality is just too high here.

*Name changed to protect his identity. 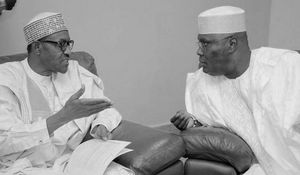 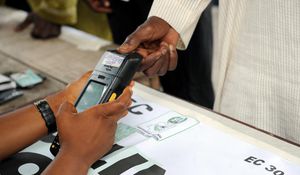 Who is the Average Nigerian?