It is no secret that Nigeria is heavily exposed to fluctuations in oil prices; the 2016 recession serves as a painful reminder of how dangerous this exposure can be. In order to reduce the economy’s susceptibility to volatile oil prices, diversification must occur to boost other sectors.

The development of Nigeria’s financial markets could serve as a tool to catalyse diversity and drive long-term growth. To summarise, businesses will come to financial markets to raise money by selling shares or borrowing via bonds. The money raised is used to expand their operations, hiring more workers, and investing in infrastructure contributing to GDP. For long-term investors, recognising undervalued opportunities could multiply initial investments and provide a stream of income, which can further be invested in more companies. What has been described is a well functioning system and economy.

Unfortunately, the situation on the ground isn't so pretty. Realising this potential depends on several factors that determine the health of a financial market, including depth, access to foreign exchange, regulation, and the wider economy. To understand the relevance, let's focus on the 'raising money via shares' aspect of financial markets - otherwise known as stock markets. What makes them work and how does the Nigerian Stock Exchange compare?

First, let's go through the basics.

Stock markets operate like every other market: obeying the laws of demand and supply. Compare it to a shopping mall like The Palms. Palms must offer a diverse range of stores, restaurants, engaging services and maintain a healthy shopping environment to attract the public to spend money.

The stock market is not so different. Rather than stores, suppliers are known as “issuers” which comprise companies or institutions seeking to raise money to fund investment activities. The products they sell are known as securities, i.e. stocks

For example, Game or Shoprite could issue shares through an Initial Public Offering (IPO), raising capital to build new stores around Nigeria in order to increase revenues.

Investors are the customers of equity markets. You, me, wealth managers and anyone who commits money with the expectation of receiving a positive return over time. I could decide to buy a share in Shoprite at a given price, either to speculate and sell later at a higher price or to earn dividends (a stake in the profits) over some time.

The level of investor participation is described as “liquidity”, comparable to water. When water is frozen all its particles stay in one place. As you apply energy to ice, water particles move faster with more freedom i.e. the more activity there is in a stock market, the more liquid it is. Liquidity is a good thing. It means in the event you have a sudden demand for cash, you can sell your shares at a predictable price because there are enough buyers and sellers to stabilise the market. This gives investors confidence to join the market.

Long story short, Jumia didn’t list on the New York Stock Exchange to be close to the Empire State Building but because it’s the most liquid exchange in the world. As a result, Jumia could raise more funds ($196m) in New York to support its business model despite the fact it only operates in Africa.

However, this isn't a sustainable model to replicate in order to develop Nigeria. Most of Nigeria's Small and Medium-sized Enterprises (SMEs) won’t grow at the pace Jumia grew in its first seven years, despite the other 37 million SMEs accounting for 48% of GDP and contributing to 84% of all jobs. In order to drive scale, SMEs must be able to generate finance through local means and only about 270 companies have ever done this through our stock exchange.

So what’s going on in our domestic stock market? Let’s go back to the Palms. The size of this market is impacted by the number of outlets selling goods/services in the mall and the value of the shops. In terms of the stock market, market capitalisation (market cap) is the number of shares publicly offered by a company multiplied by the current price per share. So a company publicly selling 1,000,000 shares at ₦10 each has a market cap of ₦10,000,000. Accumulating the market cap of every listed company gives you the total value of a stock market.

As at October 2019, the Nigerian Stock Exchange (NSE) is the fourth-largest stock exchange in Africa and has a market cap of ₦12.8 trillion ($35 billion), with 161 companies from 11 different sectors. The market is currently dominated by the Technology sector (₦3.8 trillion), though the Financial Services sector has the highest number of listed companies (53) and is responsible for most of the daily trading activity. These figures sound large but they mean Jeff Bezos could use his net worth to buy every publicly traded stock in Nigeria and still remain top two on the Forbes List.

The diagram above illustrates the market capitalisation trend across the 11 sectors over the past 5 years. Overall, the stock market has shrunk slightly since October 2014, falling in value from ₦13.0 trillion to ₦12.8 trillion. While that seems marginal, the decline is much larger when you consider that the Telecoms sector has added nearly ₦4 trillion to the market recently following the listings of MTN Nigeria and Airtel.

We can see that by looking at the performance across the different sectors: 7 out of the remaining ten shrank between 2014 and 2019. The largest decline was in the Construction/Real Estate sector, which lost over 85% of its value in five years as it declined from ₦208.9bn to ₦28.1bn. This comes as no surprise since the real estate sector in the Nigerian economy has shrunk for 14 out of 15 quarters since the 2016 recession.

In the real world

As already mentioned, Nigeria has the fourth-largest stock exchange in Africa. But let’s go deeper and compare performances with our African peers.

The table below is extracted from the 2019 Absa Financial Markets Index comparing African Securities Exchanges.

At 9%, our stock market is undervalued and not growing nearly as fast as the entire economy to be able to make a significant impact. At 292% South Africa’s stock market is almost 3 times the size of its economy (with a GDP slightly less than Nigeria’s), but that’s not necessarily great. Compared to a global average of 98.5%, figures above 100% typically mean the market is overvalued and potentially exposes the entire economy to market fluctuations. A range between 50%-100% provides the right balance which is where the likes of the U.S, U.K, and Germany have averaged historically.

In terms of liquidity as a ratio to the stock market cap, no one in Africa is doing well here. Figures below 100% demonstrate a weakness in liquidity and at 6%, Nigeria’s market is extremely illiquid, despite being the fourth most liquid on the continent.

Liquidity is good but where the money comes from matters.

The diagram below elucidates this example, showing the distribution between the value of foreign and domestic transactions in the stock market (capital flows). 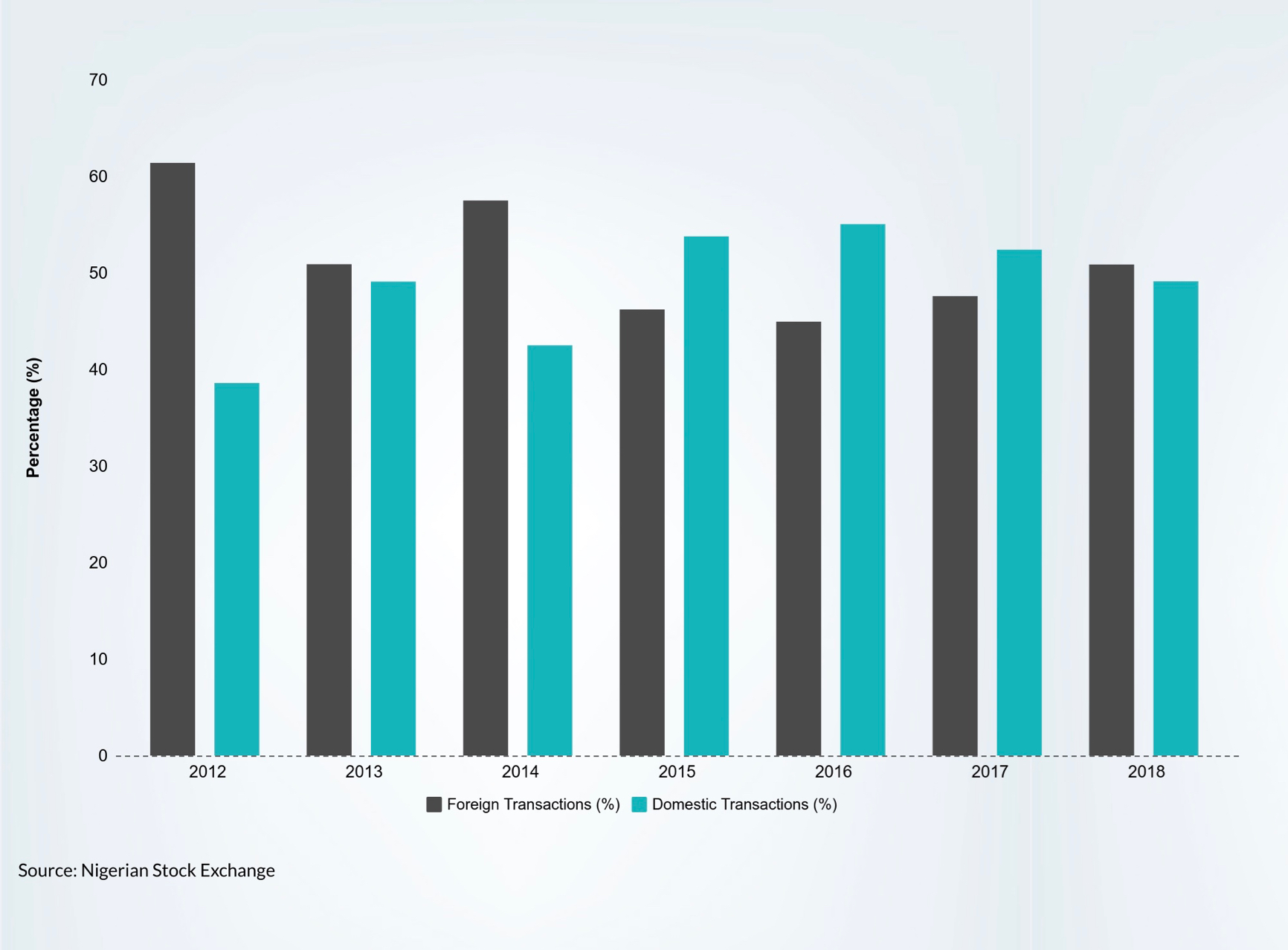 In value terms, 2014 saw the highest level of foreign participation over the seven-year period. Since 2014, foreign participation has dropped in line with the oil price, due to the stagnant economy and anti-market policies adopted by the Nigerian government. The value of foreign transactions decreased by 20% between 2014 and 2018, contributing to the overall contraction in the stock market cap. It’s interesting to note that it’s only when foreign transactions fall that the domestic transactions are able to exceed the foreign.

The relevance of these stats is to highlight the danger in the proximity of foreign and local transactions. More developed economies typically have a spread dominated by domestic transactions mitigating against the volatility of capital remitted by foreign investors.

All the stats mentioned can be improved with greater local investor participation. Growing investments from Nigerian investors can be the biggest catalyst to drive the development of the market. Encouraging just a small fraction of our 200 million population to invest in stocks will boost liquidity exponentially, incentivising more companies to list, raising more capital to expand and grow the economy, and also reducing our exposure to foreign investors.

As always, there is work to be done before we have a booming and well-functioning stock market. Nigeria's many small companies have to be given the opportunity to scale and reach IPO stage. And as for customers, there is some way to go in terms of increasing financial literacy so that more of the population can get involved. Finally, Nigeria's stock exchange can do more to clean up its act and protect minority investors.

Once more companies are able to list on the exchange and we have higher domestic investor participation and liquidity, the business environment required to create diversified companies and even industries will be one step closer to reality.