“This is the place!”

I get off at Obasanjo bus stop, Ota. I’m only a few steps into Oloko Estate, and I can already feel smoke choking me. It’s 10:15 am and the atmosphere here, soot-like, is different from other parts of town. The hazy air is a result of one of the largest waste burning dumpsites in the country – Kurata.

Ado Odo/Ota Local Government, the Industrial hub of Ogun State is home to some of Nigeria’s most famous industries. Nestle, Indomie, Nycil Ltd, Kolorkote Nigeria Ltd and Federated Steel Mills all produce here. And within the same province, you will find Kurata, the dumpsite where industries dispose of their waste at the close of the day.

Mrs Ogunbiyi, a resident of Oloko Estate, tells me that dumping and burning of waste happens every day. Oloko Estate houses about 15 communities around Kurata. I meet her for the first time at a meeting of representatives from the different communities in Ota. As at almost all other meetings, Kurata is on the agenda. Residents of affected communities – Oladipupo, Oremeji, Wasinmi, etc. – show up to discuss how to forge ahead.

“Every evening they come here, dump all sorts of chemicals and unwanted waste without considering that this is a residential area. It is too much for us!” she says to me, agitated. “I moved here in 1992. Since then things have gotten worse each year. We have reached the point where the Ogun State Government needs to come in and move Kurata to another location,” she continues, still frantic. 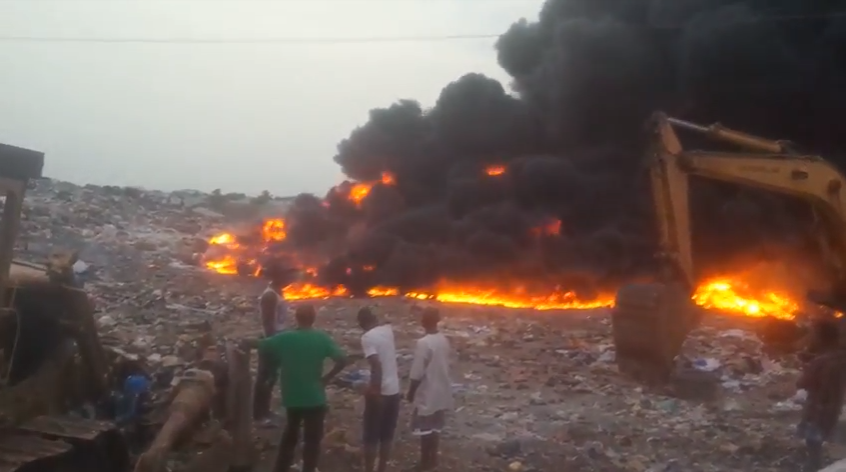 Click on the photo for a video of the Kurata dumpsite

It is easy to understand Mrs Ogunbiyi’s frustration. Anyone who has lived in a place for as long as she has, where fresh air becomes a luxury, would become agitated.

On June 18th, 2018, residents of Ota were woken by an earthquake. One of the chemical manufacturing companies, in their usual manner, had disposed of chemical waste in Kurata, causing multiple waste explosions that shook the ground and created a massive fire.

Olabode Olukolawole, secretary of Oladipupo, the closest community to Kurata, tells me that the explosion was so big it took the fire service hours to control the resulting fire. “Nycil Ltd brought in their truck around 4:30 am, they deposited drums of chemicals in Kurata. The explosion that came with it made buildings shake; everyone was running helter-skelter,” he says.

Mr Olukolawole explains that the fumes from the fire covered nearly fifteen communities. “The smoke from the explosion was so serious that you could barely see the person next to you,” he strained. Notable stakeholders like the Ogun State Commissioner of Environment, Bolaji Oyeleye, the King of Ota, Adeyemi Obalanlege and Divisional Police Officer (D.P.O) of Obasanjo were all at the site of the explosion to investigate and comfort the people of Ota. The usual promise was made: the guilty parties would be held accountable. Unsurprisingly, nothing has happened.

94% of Nigeria’s population is exposed to air pollution levels that exceed World Health Organisation (WHO) guidelines, and four of our cities are listed as some of the worst in the world in terms of air pollution. So, Nigerians are routinely exposed to hazardous pollutants that are detrimental to their health and environment. Residents of Ota, for example, are exposed to a higher likelihood of nausea, allergies, asthma, coronary heart disease, and other respiratory illnesses because of the scale of Kurata burning and the unhealthy disposal of waste. 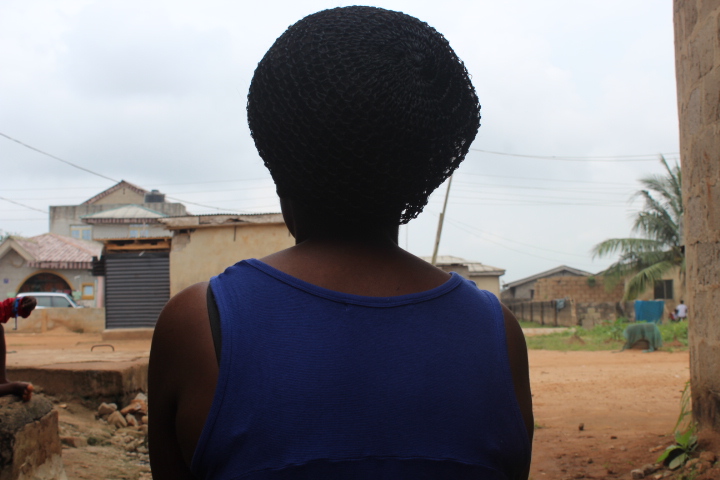 One of these residents, Evelyn Alenike, who I meet away from the community meeting, tells me that in 2014 she struggled with a respiratory illness that almost took her life. Evelyn lives in Oladipupo, which means she has been more exposed to the hazards of the dumpsite than many others.

“I was always passing out in school. My breathing was funny too. I am not sure what exactly was wrong, but whatever it was, it came with difficulty breathing and coughing,” she narrates. She was initially taken to the general hospital in Obasanjo where doctors could not place what was wrong with her. “They suspected asthma, but had to refer me to Abeokuta for a better diagnosis when my condition started getting worse,” she continues.

Evelyn and I are chatting outside her house as she washes a pile of clothes, and she confides that she still does not know what her final diagnosis was, even after being taken to the Federal Medical Centre, Abeokuta. “I was placed on Oxygen when I arrived at FMC. At that point, I could care less what the diagnosis was. I was in a lot of pain, the only thing that I didn’t stop thinking about was death,” she says to me. “I had so much smoke in my system that the doctor asked if I was a chain smoker. Whatever it was had to do with my chest and lungs,” she shrugs. For seven months, Evelyn was in and out of the hospital, taking drugs and injections.

Evelyn is not an anomaly. Many other Ota residents deal with similar health problems. Abduljelil Atoba, a resident of Ota who frequents Kurata tells me that over the past years there have been many reports around respiratory illnesses, especially among children. 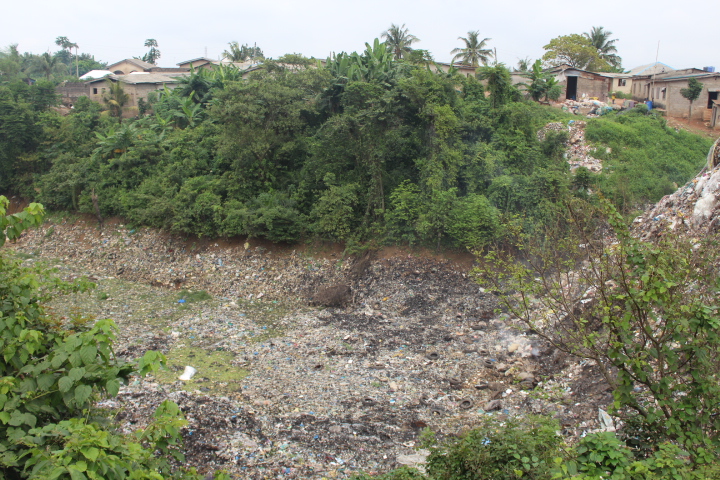 But Kurata emits more than just hazardous fumes; sometimes, the waste spills over, burying surrounding houses. Alhaji Mustapha, a community leader in Oloko Estate, laments that he has lost count of the homes that have been brought down by Kurata. “This rubbish you're seeing has houses underneath them, it keeps pushing forward as the factories dump more waste and it covers people's homes,” he says, pointing at the dumpsite for emphasis. He warns me that none of the houses close to Kurata are safe; at any moment, they could be overtaken by heaps of waste from the site.

I stroll through Kurata, taking pictures and speaking to other residents, before noticing that the trash seems to be locking water flow through the rivers. Would this not affect the water supply in the neighbourhood? I ask. Alhaji Mustapha explains it does. According to him, some communities use pure water to shower and wash. “You need to see the colour of water when it is pumped or pulled out from the well. One has to take extra measures to make it clean. It's a disaster.”

Why does Kurata even exist?

Kurata was established by a former military Governor of Ogun State, Olabisi Onabanjo, between 1981 and 1982. He earmarked the area as a waste site as, at the time, Ota was relatively underdeveloped and mostly surrounded by bushes, making it an ideal location.

Alhaji Ganiyu Oyebanji, one of the oldest residents of Ifesowopo community, moved to Ota in 1995 when Kurata was an execution centre and burial ground. “Kurata overtime has been used for different things. People used to bury the dead here, the government used to execute criminals here, and of course, waste was being disposed of here too,” Alhaji Oyebanji explains.

“When more people started trooping into areas around, it became evident that there was a need to do something about Kurata,” says Alhaji Ganiyu. Although the executions and burials stopped, industries continued to dump and burn waste in Kurata. 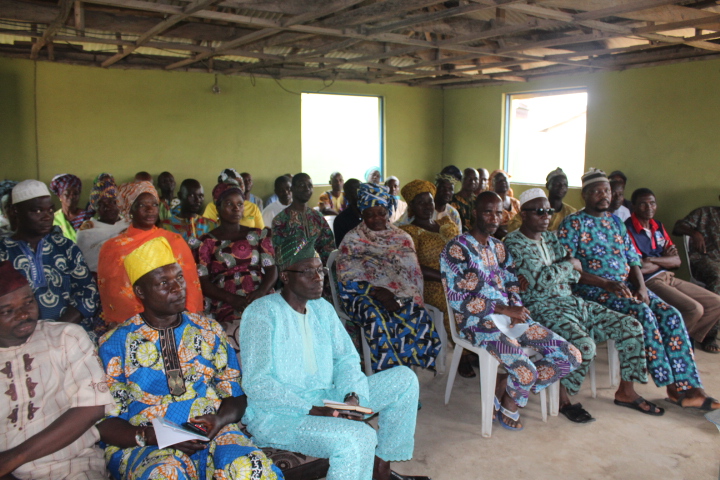 Regular community meetings are unable to solve the dumpsite problem

Community representatives have written multiple letters to the Ogun State Ministry of Environment. They have demanded that industries stop disposing and burning waste in the area.

Nothing has come out of the letters and demands.

Olabode Olukolawole tells me that he personally signed some letters written in 2012. “We wrote a letter to Ibikunle Amosun, Governor of Ogun State, about Kurata. He actually responded and said he’d look into it, but as usual, nothing has changed,” he says, his voice laced with frustration.

The state government has sometimes sat with community representatives to discuss Kurata. “There was a particular time in 2016 we were invited to the Ministry in Abeokuta. We met with the Director of OGEPA (Ogun State Environmental Protection Agency), a representative of the commissioner of Environment was also there. We really thought the meeting was going to yield results,” Olabode says resignedly.

The Commissioner for Environment, Bolaji Oyeleye has said the state will impose strict sanctions on any industry found disposing hazardous waste without the Ministry’s permission. Sadly. if history is anything to go by, this promise is cheap talk more than anything else.

The state’s primary challenge seems to be finding a replacement for Kurata, a remote location within the state that would serve the intended purpose.

Mrs Ogunbiyi, irritated by the perceived laxity of the government, questions the excuse of finding an alternative to Kurata. “They have been looking for a substitute for years, when exactly will they find it? If truly they’ve been serious about it for the past years, something concrete would have come out of their search,” she complains. 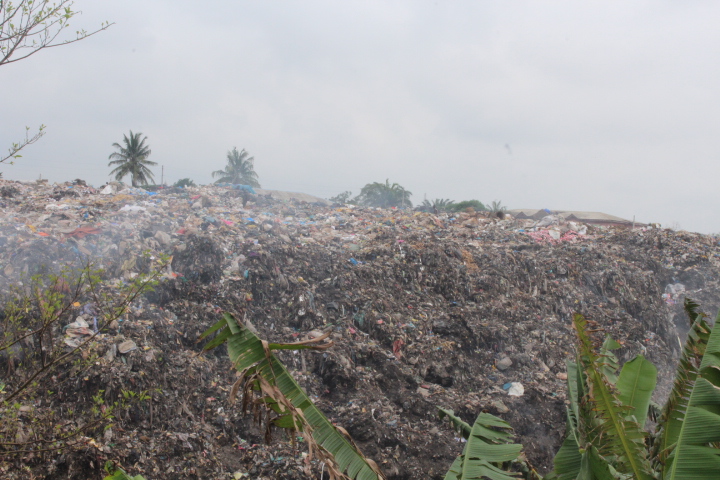 This is a common site for residents living in Kurata

Residents of Ota do not seem tired of raising the alarm over the dangers Kurata poses to their homes and environment. And rightfully so. They still harbour hopes that the appropriate authorities – or anyone else – can find lasting solutions to burning and disposing of waste in their community.

A few metres outside Ota, I am surprised by the fresh air I previously took for granted. Communities around Kurata have no such luxury. As long as industries in Ota continue to dispose and burn waste there, the people of Ota will continue to live their lives unsure of what may come next: being buried by a cloud of smoke or under a heap of waste. 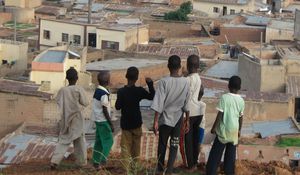 Welcome to the poverty capital of Nigeria 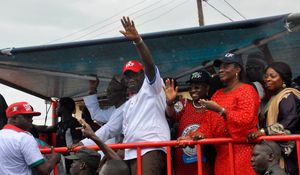