Why 65% of students who write JAMB fail to secure admission 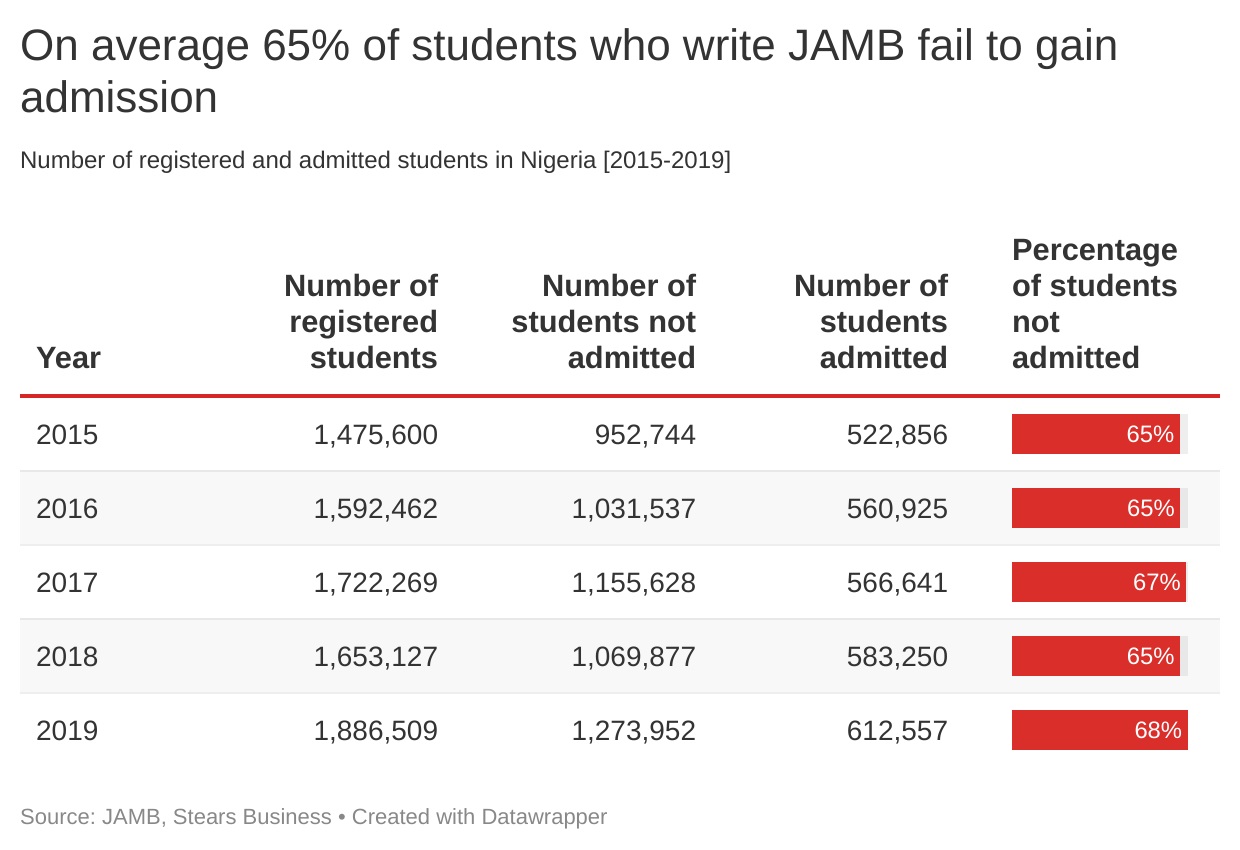 But what is JAMB, and why is it a prerequisite to university admission? The Joint Admissions and Matriculations Board (JAMB) is a Nigerian entrance examination board for tertiary institutions. The board conducts an examination that determines if a student will be admitted into a university, the result from the examination is valid for only a year. The grade range is between 0-400. The general pass mark for most universities is 200/400. Students have to meet the pass mark to continue the admission process. Students with scores less than the pass mark are automatically disqualified from the admission process for most universities. They have to retake the exam the following year, which brings a lot of frustration, especially when they see people moving forward in life while they are stuck with the "high school graduate title".

The general belief among Nigerians is that the next step after secondary school studies is gaining admission to a university,  then getting a job afterwards. For many, this is their only path to a promising future. Unfortunately, it's very common to hear students on university campuses tell stories of how they wrote JAMB at least four times before gaining admission.

Many blame it on the continuous decline in the quality of education in the country. The teachers are poorly trained, schools are poorly equipped, lack of required infrastructure and training facilities such as computer laboratories which would help train the students on how to use a computer system and also prepare them for computerised examinations such as the JAMB exam.

So, if students aren’t properly taught and do not get the required training, how do we expect them to perform well? Even answering that question will not give us a satisfactory response. When we look deeper, we find that there is more to the story.

After writing JAMB, students also have to write a “Post-UTME” exam conducted by the universities and then meet a particular cut-off mark to secure one of the not-nearly-enough, prized admission slots for their desired course. The “Post-UTME” is an examination or screening test conducted by various universities for students who attained their cut-off mark after writing the JAMB exam. For example, a student has to score at least 50% (200/400)  in JAMB to be qualified to take the ‘University of Lagos’ “Post-UTME" exam.

Another surprising way to get kicked out of a school's admission list is by wrongly combining your O'level results for the selected course of study. O'level means ordinary level. It is the final examination students take at the end of secondary school studies. The West African Examination Council (WAEC) and the National Examination Council (NECO) are the two common examination boards for this level. Students need to pass at least five subjects in the O'level exam, including Mathematics and English Language, to qualify for the admission process. So failing the JAMB exam is only one reason to get disqualified from the admission process in Nigeria. Then, there is the low "Post-UTME" screening score or absence from Post UTME screening conducted by these universities.

Other reasons include a JAMB-combination deficiency (registering the wrong subject combination for the course of study) and duplicated applications.

That said, one other important factor limiting admissions is the number of spaces available. Out of the 1.9 million students who registered for the JAMB exam in 2019, there were only 1.1 million slots for all tertiary institutions in the country. In essence,  40.4% of the students who registered that year automatically do not have a chance. For instance, a few courses like Medicine and Law get oversubscribed (Phew! that childhood dream of every kid wanting to be a Doctor inspired by most parents, of course). According to JAMB, this is one of the reasons students did not gain admission.

So, sometimes, even if you did do well in the JAMB exam by scoring more than 75% (300/400), you could still end up not gaining admission if you do not have the university’s specific requirements or any of the other reasons stated above. 664 students out of the 2,967 that scored 300 and above in 2019 were not admitted as a result of this.

Out of the 108,917 students who applied to the University of Ilorin in 2019, the institution could admit 11.2%. But eventually, it admitted only 10.7% of its total applicants that year. With such statistics, it is clear that the main reason students do not gain admission into these institutions is not that they are not smart enough. Universities’ limited capacity to admit students enforced by their cut-off marks and requirements plays a huge role too.

Many articles have been written on how every student doesn't need to attend university as alternatives include vocational and technical schools. However, it is impossible to deny that most of the highest white-collar earners in the country are people with a University degree. This explains much of the allure of university education to the country’s youths.

So as not to lose out totally, many students have to accept and study courses that they did not apply for in the first place.

“They gave me another course”

Sometimes, universities offer students who did not meet the cut-off mark for their desired courses less competitive courses as they usually have fewer students applying for them. While students can decline the new courses offered by the university, the majority accept as they do not want to spend another year at home. An example of this scenario was a student who applied for Human Nutrition but was transferred to Agric. extension.

So, a common tale by university students is how they are studying courses they have no passion for. However, the choice for students to follow their passion is also limited. In western countries, students attend various classes from Maths to Science to History. They then go for various activities including football, basketball, drama, music, arts and craft, and many others. These activities help nurture the student talents from an early age. In Nigeria, the closest system we have to this is the SEGUN ODEGBAMI International College and Sports Academy established in 2007, which is a multi-sports secondary school for young boys and girls. Having a schooling system similar to the western that nurtures, encourages and helps students follow their actual passions will ensure that they don’t automatically see gaining admission to a University as the next step after their secondary school education.

“Kelechi Iheanacho” and “Wilfred Ndidi” are examples of people who became successful by pursuing their passion and love for football.  They both currently play for Premier League club Leicester City and the Nigeria national football team. The Leicester City duo gained interest from clubs in Europe due to their performances for the Nigeria youth team. They started their football careers by attending a sports academy in the country before gaining a move abroad. It is worth remembering not everyone can succeed with their passion, as one can encounter some difficulties along the way. And since the learning opportunities available for upskilling one’s passion in Nigeria are often expensive and limited, other options have begun opening up to the Nigerian youths.

One common solution to this is creating formal avenues of gaining entrepreneurial skills. There is already an explosion of online entrepreneurs due to the delays in university admission and the lack of adequate jobs for graduates in the country. While these entrepreneurs are using the internet to reach more customers than ever and increasing their chances of survival, learning the basics of running a business like book-keeping, marketing and customer service will ensure the long-term viability of their businesses.

According to SMEDAN, 80% of small businesses fail within five years due to a variety of reasons such as poor management and lack of planning. So, therefore creating formal avenues to help entrepreneurs boost their skills and learn how to run a business properly and effectively would lead to a decrease in the failure rates. It would also allow them to grow big enough to become employers of labour and lead to a cascading effect when they start to employ other youths.

Technology is also the hottest thing in town

There is an exploding interest by the youths in the technology sector with the growing number of startups in Nigeria and the rise of remote work. The good thing about the technology sector is the relatively low barrier of entry as most technology roles do not require formal education. In fact, a vast majority of workers in the tech industry have university degrees in courses completely different from computer science. They are either self-taught or attended a tech academy. The rise of tech academies like Decagon (which train people in software programming and other tech skills) mean that students no longer have to spend valuable years of their lives writing JAMB and attending university. They can spend 1/8th of that time learning software programming and then immediately entering the workforce and adding value to the economy (and their pockets).

While students go through series of rejections and frustrations from taking the JAMB exam multiple times, the alternatives above are worth exploring. Even with the challenges, the youth are currently facing, especially when it comes to JAMB and gaining admission to universities, they can still pivot and make the best of their circumstances. 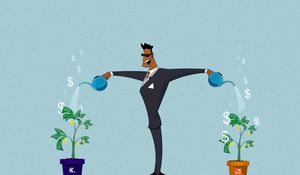 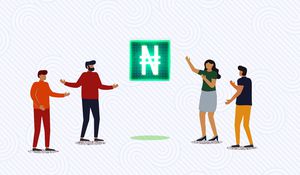