Your Money Where Your Vote Is

When the UK voted to leave the European Union (EU), there was a 250% increase in "what happens if we leave the EU" Google searches. Worse, "what is the EU" immediately became the second most EU related search.

Voters don't seem to know what they voted for until after it has happened.

There are many reasons for this; lack of information, a flawed grasp of civic duty, and sometimes, unexpected circumstances. For instance, Buhari intended to grow the economy and promised to strengthen the exchange rate. Little did he and voters know that oil prices would crash, leaving us with a much weaker ₦360 = $1 rate instead. Just as Britons began to ask Google for what Brexit looked like after the vote, initial Buhari supporters, including The Economist, are now scouring history only to find that the President has repeated his economic "mistakes"  from his stint as head of state 30 years ago.

This ignorance extends to the Nigerian budget. Voters neither know nor have a say in how their desired candidates will spend public funds until the candidate has secured victory.

Economists usually see the role of government as a fallback when markets fail, either through regulation or fiscal spending. When we vote for a president, we are essentially giving power to an individual who will make these fiscal interventions. Our votes decide the individual who allocates and spends the budget.

We should not underplay the importance of the budget, and we cannot dismiss the fact that there are inefficient ways of allocating it. For example, allocating the entire budget to the State House would be a clear waste of money.

Beyond the obvious cases, however, it may be difficult to assess the best way to spend public funds. To my knowledge, no economic model says ₦20 billion more in Education vs Transport will increase GDP by a certain amount. Still, some are clear – an extra naira in the Housing, Power and Works Ministry will likely contribute more to the economy than the ₦371 million that the government allocated to buying newspapers for already wealthy public servants in 2016.

But what about spending to boost Nigerian's wellbeing? In a recent paper, Mr Bode Agusto, CEO of Agusto & Co asked, "In a country of 200 million people, is it fair that over 60% of FGN revenues is paid to about one million public servants as salaries?" The question is trickier than it first appears; these one million public servants are in charge of creating a lot of value in society, from teaching our kids to making our laws. Still, it highlights the budget allocation debate on where public money should be spent.

This year, the UK is spending over 35% of its £805 billion budget on social care protection and personal social services. This includes a wide range of benefits that the government provides such as cash for the unemployed and the disabled or income support for families with children. That is an example of a budget that seeks to improve the wellbeing of voters, especially those that the free market has forsaken.

The wellbeing of voters is very much at the centre of the democratic process and budget allocation. The public votes based on how the respective parties promise to spend and improve their welfare.

The Budget You Voted For 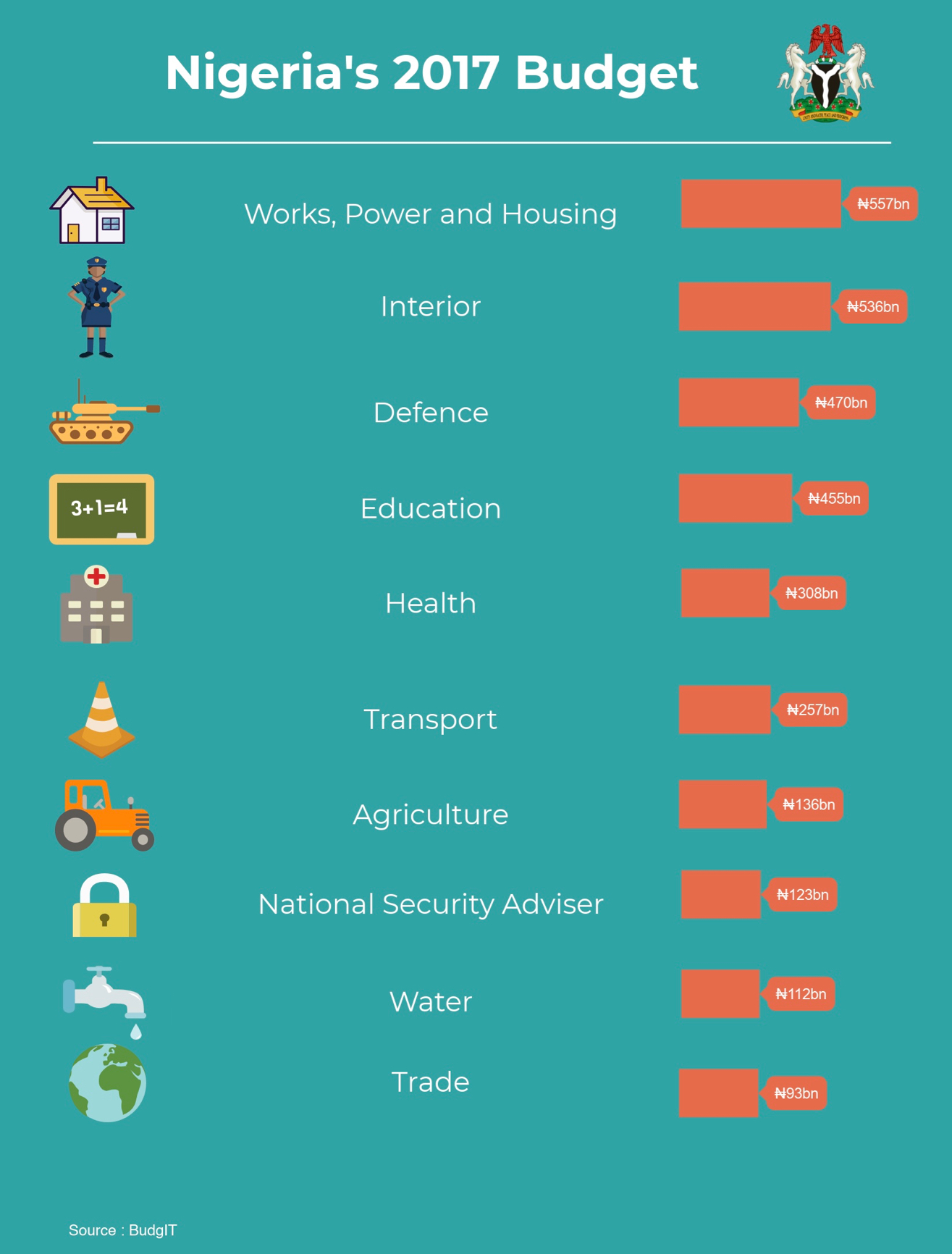 How many voters expected that the 2017 budget would be allocated as it was? Buhari said he would reduce recurrent expenditure a week after he was elected, but the budget allocation was anyone's guess. Few would have predicted that health’s percentage of the budget was going to be lowered from 6% in 2015 to 4% in 2017.

In other African countries such as Rwanda, Botswana and Malawi, allocation to health is over 17%. South Africa allocates 12%. It is hard to understand a democracy that produces a government that allocates as little as 4% to something so important to voters. Unless Nigerians do not care about healthcare.

How much control do we have as voters? Ignoring Works, Power and Housing, which are three ministries in one, Interior is the greatest beneficiary of the Nigerian budget. Do voters want ₦536 billion going to the interior ministry and over ₦100 billion less going to education? The police, customs and, immigration get that much and are still famous for collecting bribes?

No Tax, No Influence

"Taxpayers' money" is a common phrase in countries like the UK, but evades the lips of Nigerians. We aren't a tax paying society, and it could be costing us.

In Bracket, a song off his 2018 album KOD, U.S. rapper J Cole muses, "I said Democracy is too slow. If I'm givin' y'all this hard-earned bread, I wanna know. Better yet, let me decide... It's 2018. Let me pick the things I'm funding from an app on my screen." This verse which portrays his anger against democracy and the allocation of the US budget begins with the line, "Yeah, I pay taxes, so much taxes... don't make sense, Where do my dollars go?"

Perhaps the reason Nigerians don't question how their Naira is spent is that they don't pay taxes. The very poor shouldn't be to pay taxes, but the rest of the population, including the very wealthy, don't seem to demand a responsible allocation of public spending. Without paying tax, voters don't fully consider what the President will do with public money as it doesn't come from their pockets directly.

Mr Cole's suggestion of allocating the budget via an app has its flaws. Giving people too much autonomy on budget allocation can also be a bad thing. Civil Service 101 is value for money, and the public is unlikely to incorporate this and other essential budgeting techniques. However, there is a middle ground. Voters may not know what allocation they want, but they certainly want a budget that affects well-being more than they want the ₦160 million allocated for "Celebrations" at the Ministry of Transport since 2015.