In partnership with the African Private Equity and Venture Capital Association hosting their 15th Annual AVCA Conference in Morocco, we take a look at trends in the deals, exits and private equity firm activity across Africa over the past few years.

Six of the ten projected fastest growing economies in 2018 are in Africa. During the last commodities-driven boom, private equity fundraising in Africa increased from 4% of global fundraising in 2008 to 9% in 2015 (pdf). The World Bank predicts that half of the African countries will grow at a rate higher than or equal to their peak during the days of high commodity prices. Fingers crossed, maybe “Africa rising 2.0” is on its way.

In the most recent AVCA survey of limited partners in private equity firms, majority of them stated that they see Africa as a promising region and plan to maintain or increase their allocation to Africa in the next year.

Here are the trends: 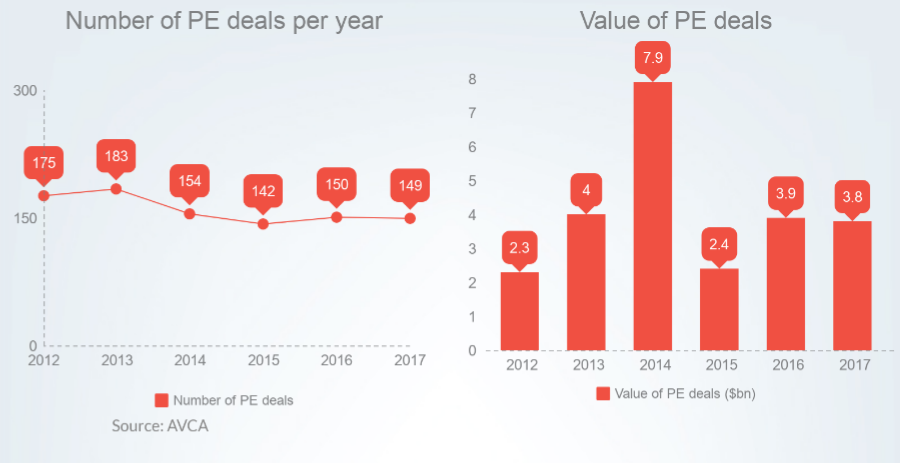 Most African economies are still largely based on resources, and a rise in the global prices of commodities towards the end of the ’00s led to increasing optimism about investing in Africa. As dollars flowed in, the value of private equity deals in Africa rose steadily. However, the value of deals in 2017 are less than half its 2014 peak, even though the number of deals seem to have stabilized around 150 per year in the past three years.

2. Consumer Goods Leads in Number of Deals but Infrastructure Leads in Value of Deals 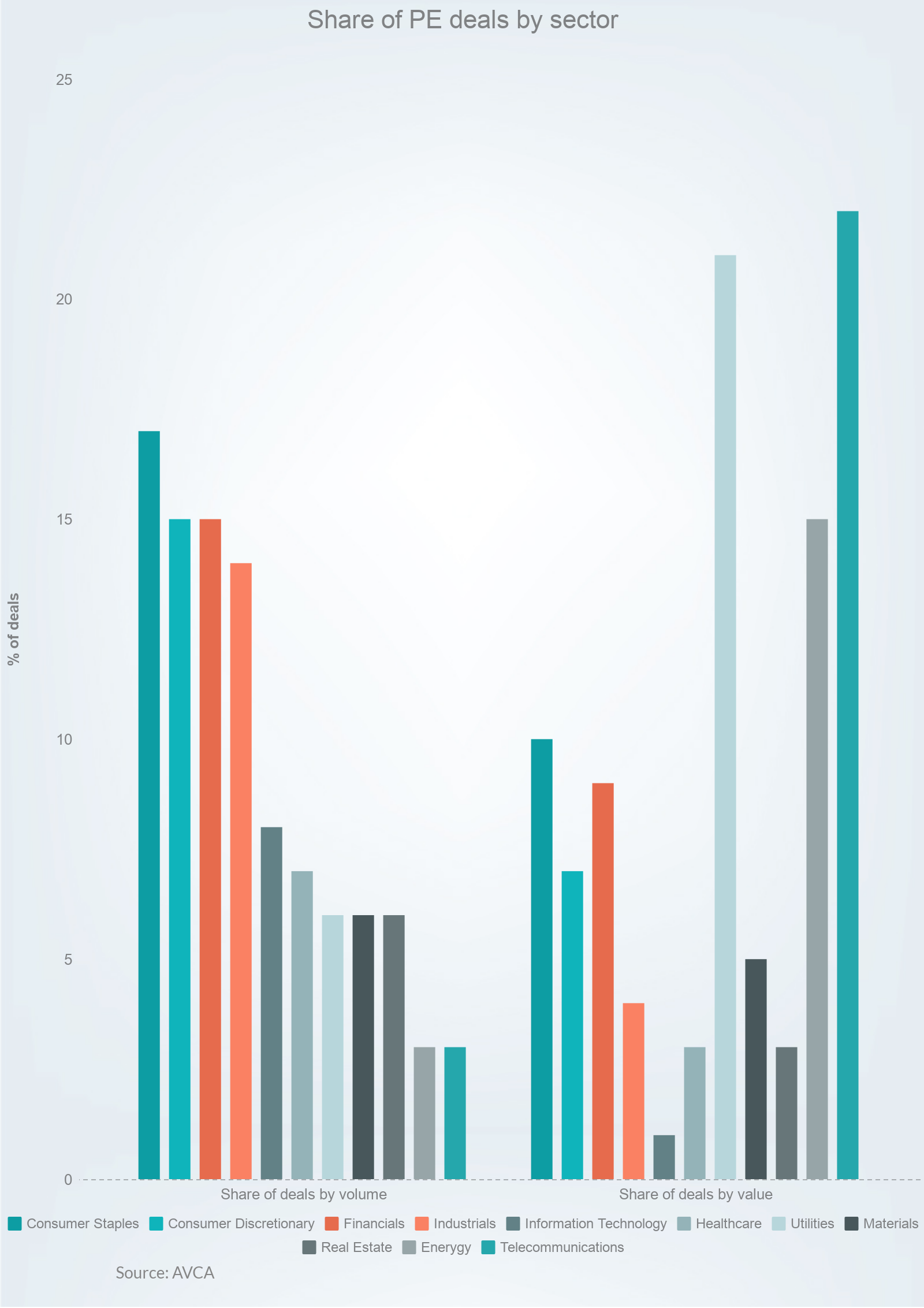 The aim of a deal in private equity is to achieve an exit; this essentially means to sell their stake in the company, either to another company or to the general public through an IPO. Around one in three deals was done in the consumer goods sector but the largest deals by value were done in the utilities, energy and telecoms sector. This is expected as these are the sectors that require large investment in infrastructure.

While consumer goods had the highest number of deals, it lagged some other sectors in terms of exits. The investment in consumer goods was driven by a belief that there is a growing middle class in Africa that would create demand for consumer products like clothing, food and jewellery. The reality was a little more complicated, as it wasn’t clear that the middle class actually exists. Middle-class consumers in Africa are also prone to shocks and do not have as much purchasing power. A number of foreign consumer goods companies, including Nestle ended up scaling back their Africa operations.

3. Majority of LPs Are Bullish On Africa 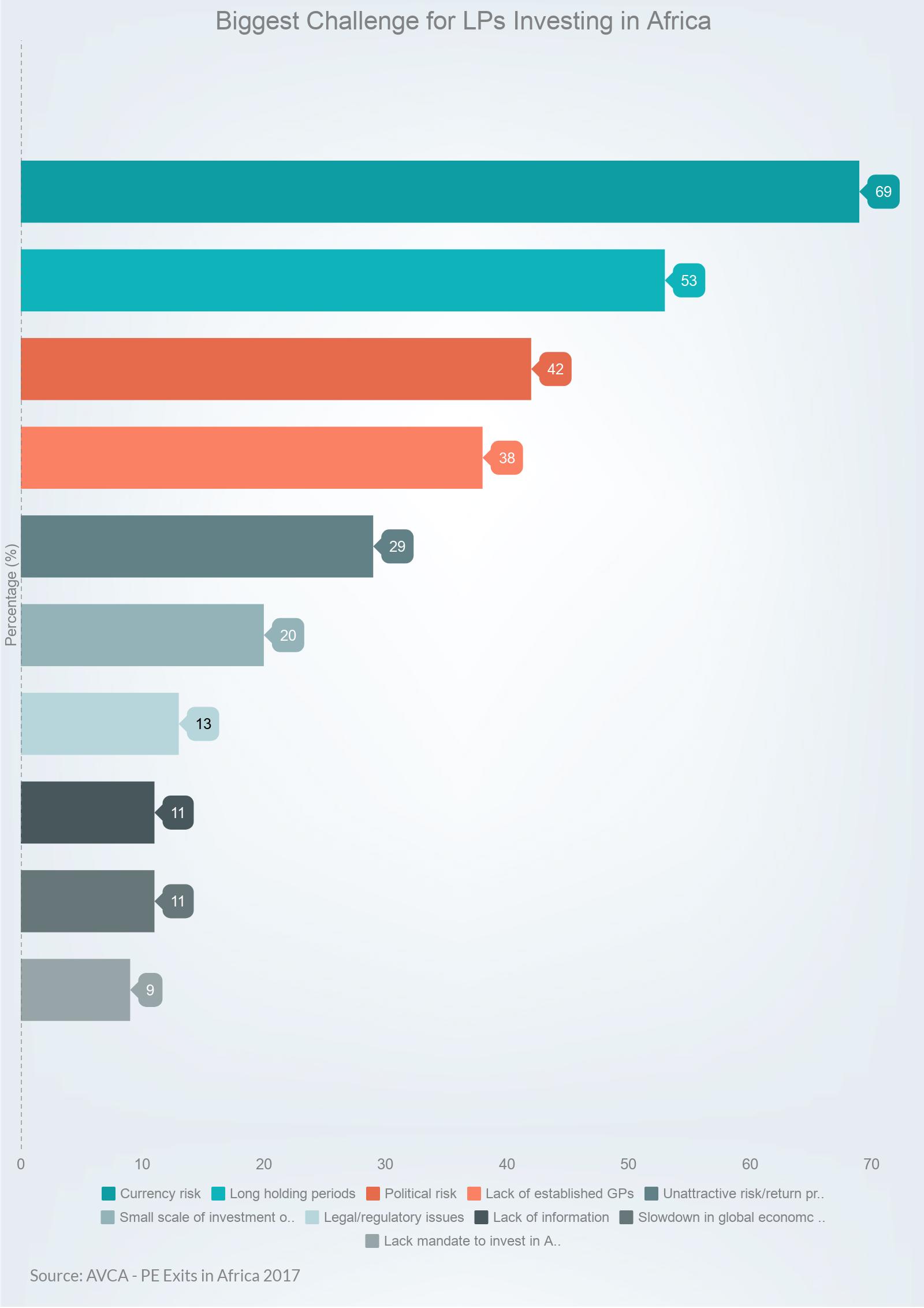 88% of limited partners (LP) in private equity firms stated that they intended to maintain or increase their allocation to Africa over the next year. 63% percent also said that they view Africa as more attractive than other frontier and emerging markets over the next ten years (pdf).

The majority of LPs surveyed by AVCA cited currency risks (69%) as the major challenges to investing in Africa. Major African currencies like the Egyptian pound and the Nigerian Naira have struggled in recent years. Both countries took different approaches to dealing with currency weakness as Nigeria devalued the Naira a number of times but still maintained a peg to the US dollar while Egypt decided to float it's currency completely. 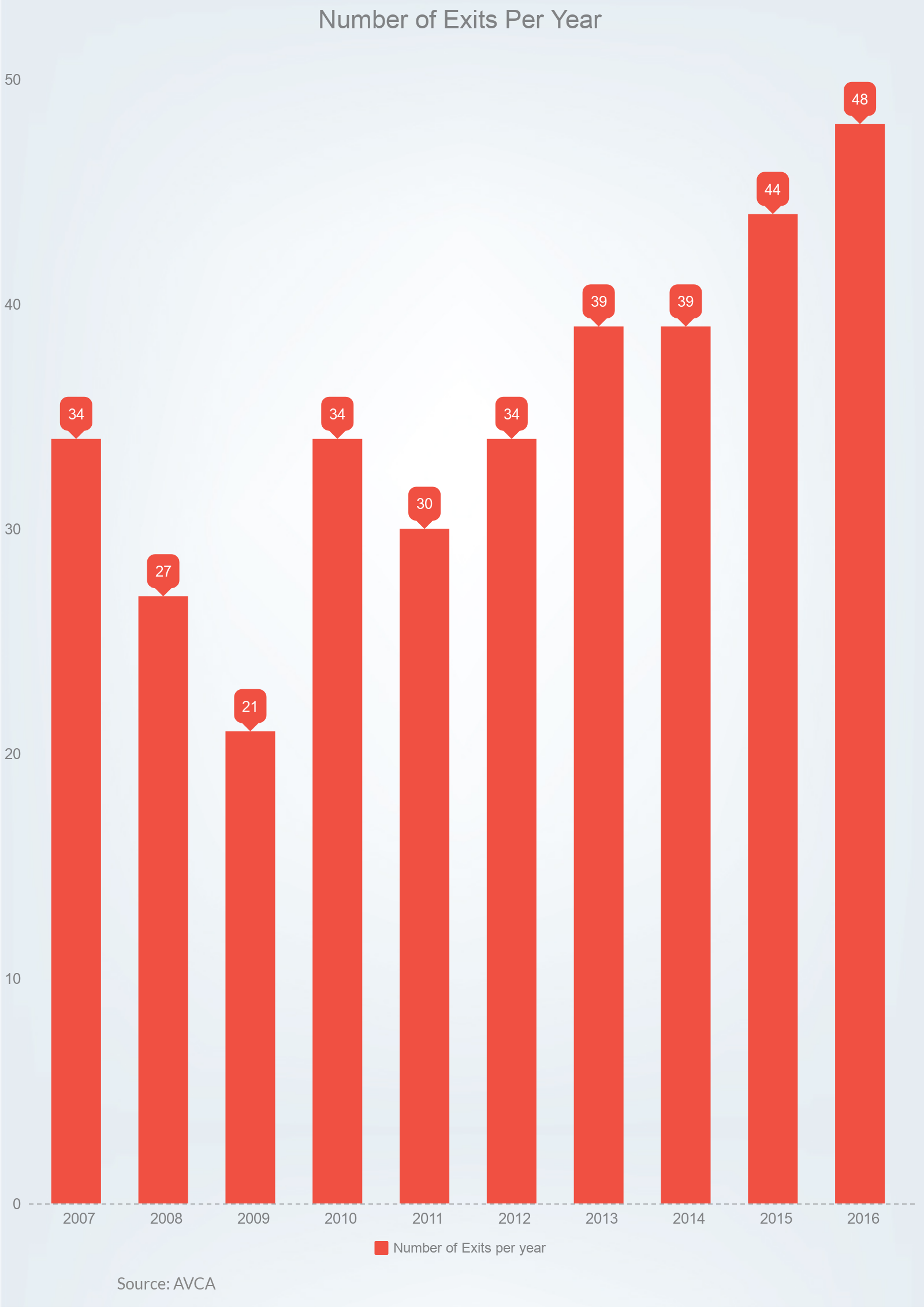 While deal flow has dropped from its 2014 peak and GPs have concerns about the funding environment, exits have continued to rise steadily. This is understandable as exits are a lagging indicator. Exits being made today are a result of investments made a few years ago.  For example, the average holding period of a PE exit in 2016 was 7.5 years, while it was 3.9 years in 2009. Although this number was distorted by a greater number of exits of infrastructure investments with longer hold periods. (pdf). 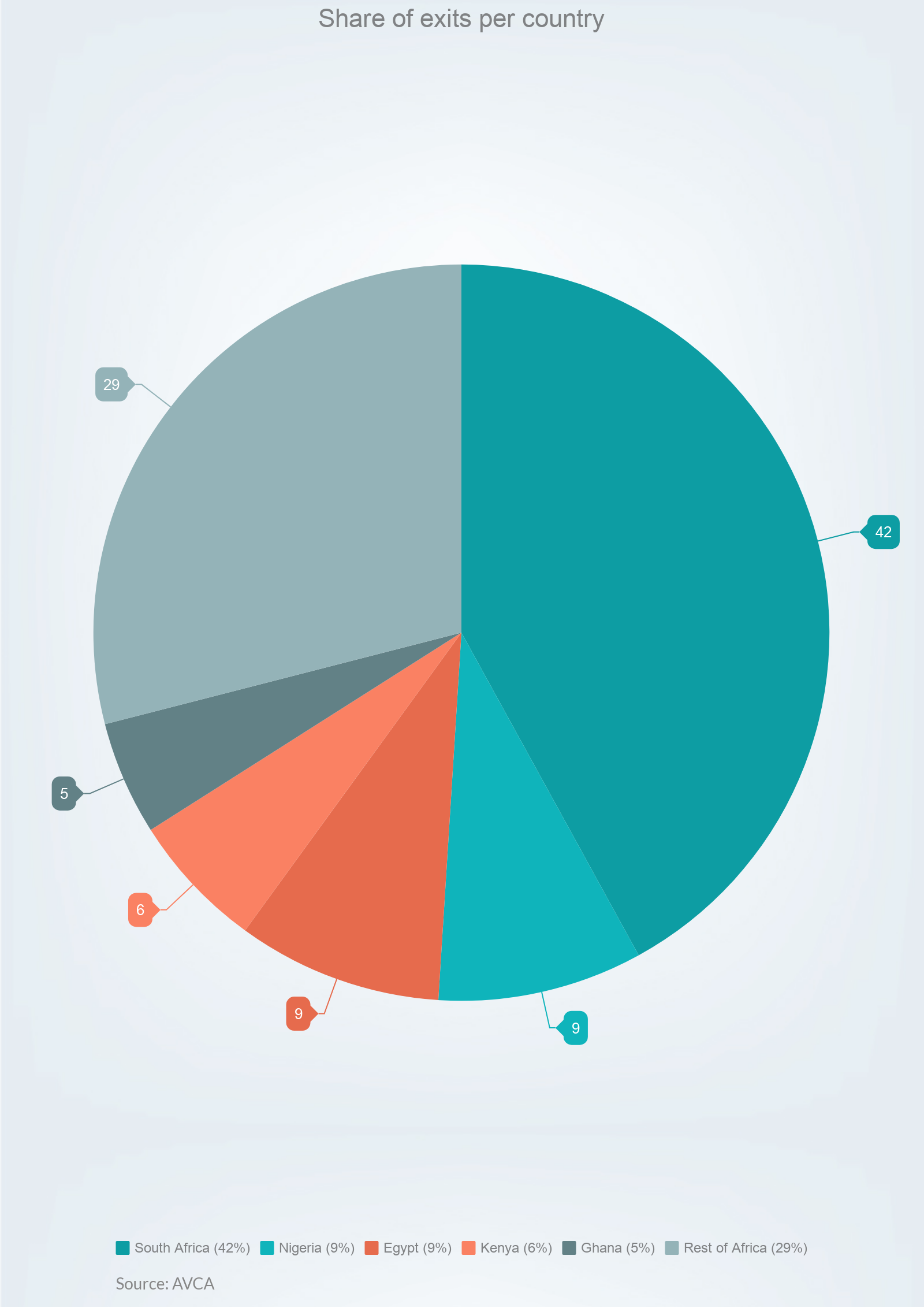 Exits are heavily concentrated in Africa as only a few countries account for the bulk of the exits in the private equity space over the past ten years. South Africa alone accounts for over 40% of the exits on the continent, while the top five countries, South Africa, Nigeria, Egypt, Kenya and Ghana account for 70% of exits.

5. Buyouts Are The Most Common Exit 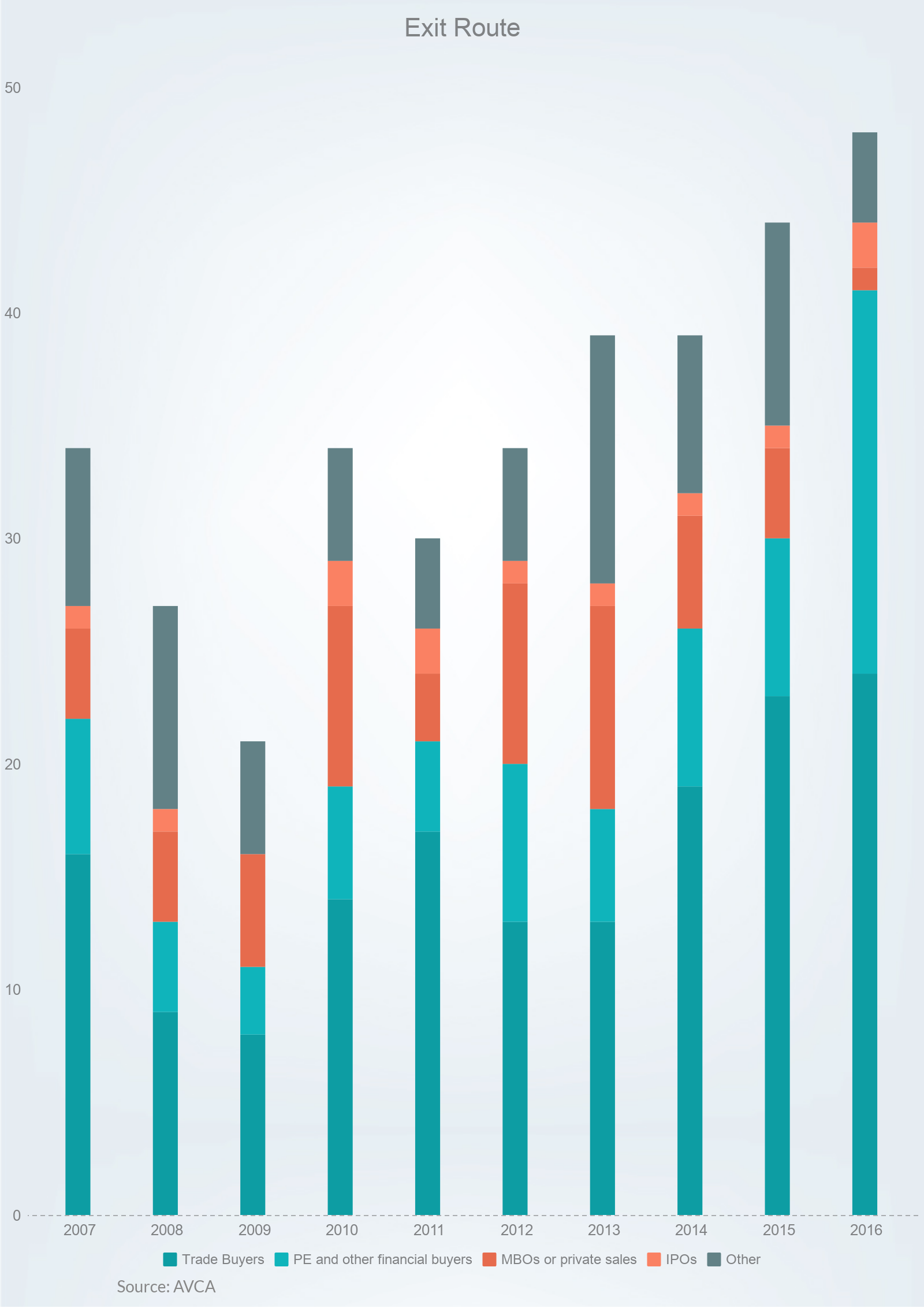 Buyouts are the most common exit. Trade buyers, who are buyers from the same industry as the acquired firm, account for the bulk of the exits. Buyouts from other PE firms also account for a large amount of exits.

IPOs do not account for many of the exits with only two PE investments exiting through a public listing in 2016.

What should we conclude?

Deal flow in PE has flattened since the commodities bust but LPs remain bullish on Africa in the long term. With increased prospects of economic growth in Africa and LPs looking to increase their Africa allocation, if African governments can implement sensible macroeconomic policies, the next few years in private equity in Africa are very promising.