Oil has been Nigeria’s most important commodity since the first well was drilled in 1956. Today, the commodity contributes 90% of physical export earnings and 63% of fiscal revenues. High dependence on oil is common in oil-rich countries; oil contributes at least 80% of Saudi Arabian government earnings. But a closer look at Nigeria’s economy reveals a hard truth: Nigeria is not an oil-rich country, so oil dependence is an anomaly, one that could be fatal for the economy. 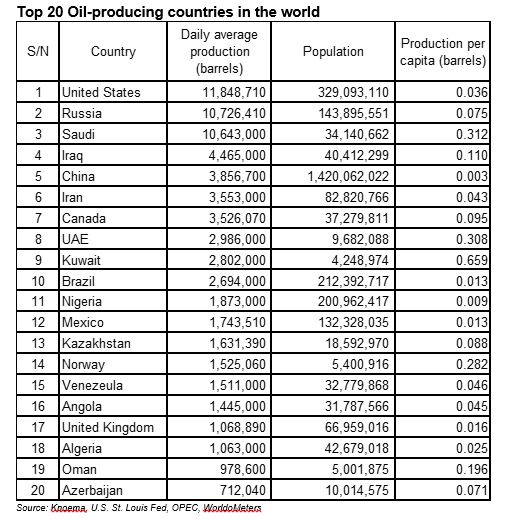 The table above illustrates the top 20 producing oil states, and as seen from the table, Nigeria is the 11th most prolific oil producer in the world, behind countries like China, Brazil, and the United Arab Emirates (UAE).

On average, Nigeria has produced two million barrels per day over the last five years, meaning it has never threatened the world’s top-10 oil producers. Nigeria is also one of the least productive oil-producers in the world.

In fact, of the twenty leading oil producers, Nigeria has the 19th lowest production per capita; the country produces less than a barrel per 100 people, only China produces lower at 1/3 of a barrel per person.

Nigeria also underperforms against its African peers with regards to per capita production. Although Nigeria produces the most oil in Africa, it produces less oil per person than Angola and Algeria. No matter how you spin it, Nigeria is not oil rich, particularly when you split its oil production across the population.

Beyond production, let us look at how oil rents are shared across the population. Data from the Central Bank of Nigeria (CBN) indicates that Nigeria collected ₦5.5 trillion ($15.4 billion) in gross oil revenues, translating to ₦27,700 ($77) in per capita terms. This is below the newly approved minimum wage of ₦30,000, which essentially means that Nigeria would not be able to pay its workers if it relied on just oil revenues.

Another thing to remember is that the oil sector is small relative to the Nigerian economy. The largest segment of the Nigerian economy is the services sector, which includes industries like Real Estate, Telecomms, and Finance. In total, services account for 58% of the Nigerian economy. Agriculture comes in next and accounts for about 21% of GDP but as much as 50% of the labour force because it is labour-intensive. Nigeria’s oil & gas sector accounted for just 11% of the economy in 2018. With a national GDP of ₦128 trillion ($355 billion), the oil & gas sector was worth about ₦13.6 trillion ($38.0 billion).  To put this in context, Real Estate and Construction were worth ₦8.6 trillion ($24.0 billion) and ₦6.0 trillion ($16.8 billion) respectively.

Nigeria has not fully harnessed its Oil and Gas potential

Given its oil & gas reserves, Nigeria has not fully harnessed its oil & gas potential. We see that through the absence of investment in the last decade.

In 2013, Total invested $3.3bn in a Floating Production Storage and Offloading (FPSO) vessel known as EGINA. An FPSO is able to receive oil produced from subsea wells, store it, process it and offload it on to crude oil tankers for export. EGINA began production at the end of 2018 and is expected to reach 200,000 barrels/day, roughly 10% of Nigeria’s current production.

But the only other significant investment in the pipeline is the Zabazaba development project by Eni, an Italian multinational oil and gas company. The project would add 150,000 barrels/day if it comes online, but a Final Investment Decision (FID) has not been reached on the project.

Although low oil prices have not helped in recent years, the main reason for the lack of investment in Nigeria’s upstream oil & gas sector is weak regulation and rampant corruption. The failure of the government to pass a version of the Petroleum Industry Bill (PIB) continues to haunt the industry. The PIB would break up the opaque Nigerian National Petroleum Company, reduce the discretionary powers of the Petroleum Minister, and alter the sharing formula between the government and oil companies, among other things.

Nigeria is considered an oil-rich country when the data shows that it is clearly not. Even as the government persists on its diversification efforts, it would be wise to create an enabling environment for the oil & gas industry to thrive. After all, Nigeria may not be oil-rich, but it isn’t oil-poor either. 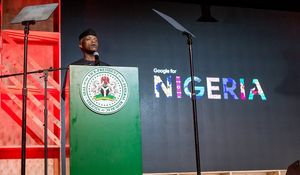 Overpriced: Why Nigerians pay so much for data 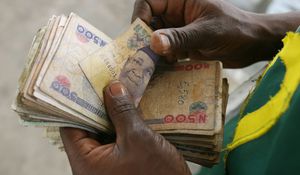